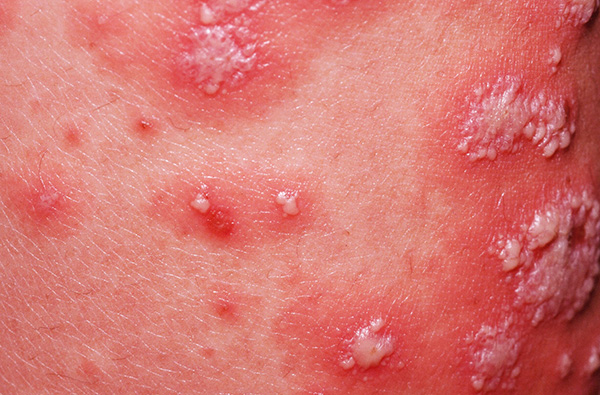 There is a very rare form of psoriasis that’s known as pustular psoriasis. It is characterized by the presence of several pustules that are white (they are filled with pus) and the skin on which they appear tend to be reddish.

Initially, pustular psoriasis will simply appear as very red patches on the skin. Medical experts say that loss of appetite, nausea, coughing, joint pain, headaches, fever and chills are some other symptoms.

Experts say that sometimes those pustules may appear on the tongue, which can make activities such as eating and talking a bit difficult for those who are suffering from pustular psoriasis.

In children, the symptoms associated with this rare type of psoriasis are said to be milder. Also the white-colored pustules, which tend to form ring shapes, tend to concentrate on the arms, legs and trunk.

Just like any other type of psoriasis, no one really knows the exact cause of pustular psoriasis. Medical experts do know, however, that it’s usually a combination of various genetic and environmental factors.

Being seen by a skin specialist is important for proper diagnosis and treatment. There are also some home remedies for pustular psoriasis that anyone may use in conjunction with the treatment a doctor recommends.

Here are some of the most effective all-natural solutions for pustular psoriasis.

Also Read   How to Organize Your Fridge

Relief from the symptoms of pustular psoriasis may be attained by doing a 15-minute warm bath — not hot as it will only aggravate the problem. Some individuals with pustular psoriasis swear by the effectiveness of dissolving Epsom salt in their bathwater, while others say that colloidal oatmeal dissolved in it works better for them.

Those who are suffering from pustular psoriasis should remember to save their skin from ending up dry. Otherwise, the symptoms they are having may only worsen. After taking a warm bath, it’s a good idea to apply mild skin moisturizer. The use of humidifier at home can also help wonderfully in keeping at bay skin dryness.

Attaining relief from the symptoms of pustular psoriasis can be as easy as gently massaging olive oil on the affected areas of the body. This healthy oil not only hydrates the skin, but also nourishes it and even reduces inflammation. It is also a great idea to include olive oil in the diet for healing from within.

It’s important to keep the skin from being touched by anything that has harsh chemicals in it to prevent aggravation of the associated symptoms. When shopping for personal care products as well as household cleaning solutions, those with pustular psoriasis should go for items that are all-natural and free of any harsh ingredient.

Having well-balanced meals is beneficial for people who are suffering from pustular psoriasis. Definitely, they should not put in their mouths anything that can trigger inflammation, such as foods that are very sweet, salty and greasy. The addition of turmeric in the diet is recommended since it has anti-inflammatory properties.

One of the well-known triggers of psoriasis — pustular or any other kind — is stress. It’s exactly for this reason why those who are diagnosed with pustular psoriasis to avoid as much stressors as they can. Engaging in various stress-busting activities like painting, journal writing, listening to soothing music and doing yoga can certainly help.

Raw Honey – Why is it Good for You?

Learn About the Medication That Can Deal With Hot Flashes

Ingredients to Avoid in Skincare Products

How to Use Rosehip Oil for Your Face