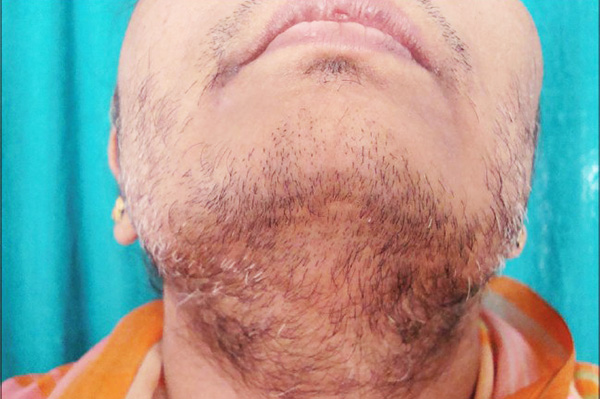 The development of male characteristics in women is a condition that’s referred to as virilization. Also sometimes known as masculinization, it’s something that can be due to a variety of things that can cause an imbalance in the levels of hormones, from a medical condition to the intake of male supplements.

Available treatments for virilization are varied, depending on what’s causing it exactly. So in other words, it’s a condition that can be reversed. Once the root cause has been dealt with and the levels of hormones are restored to normal, the different signs and symptoms of virilization usually come to an end.

Hirsutism, which means excessive growth of hair in various areas of the body like the face, chest and back, is one of the most common telltale sign of virilization. On the head, however, there is a different story going on — hair thinning or baldness, which is also known as androgenic alopecia, can be observed.

Virilization can also make a woman’s voice sound deep and gruff, and it can cause her muscle mass to increase. In some women, this condition can make the breasts become smaller and cause the clitoris to either enlarge or shrink. And speaking of which, it’s very much possible for the sex drive of the affected woman to increase.

Acne is something that can bug a woman who is suffering from virilization. Other than on the face, acne can also form on various parts of the body such as the hairline, chest, back, armpits and groin.

In some women, virilization may also cause changes in the menstrual cycle. Initially, the amount of blood that comes out during periods may become scanty. It’s also very much possible for oligomenorrhea, which is the medical term for irregular periods, to strike. Eventually, menstruation may come to a complete stop (amenorrhea).

Some other signs and symptoms may be observed, depending on the underlying medical condition. For instance, fat collection on the trunk’s upper portion may signify that Cushing’s syndrome is the cause.

Virilization happens when hormonal imbalance happens. In most instances, it’s the result of an increase in androgens or male hormones. You see, a little of those male hormones such as testosterone are also produced by a woman’s body — some of them by the ovary but majority of them are by the adrenal glands.

Practically any medical condition that can give rise to such imbalance in the levels of hormones can cause virilization. Just like what’s mentioned earlier, Cushing’s syndrome can be one of them. Sometimes it can be due to the formation of tumors in the adrenal glands, or elsewhere on the body provided that they’re the kinds that produce androgens.

The enlargement of the adrenal glands, which then leads to the production of excessive amounts of androgens, can also cause virilization. Although uncommon, it’s also possible for virilization to happen when a woman suffers from polycystic ovarian syndrome or PCOS.

Virilization may also strike if a woman is taking male supplements, or using anabolic steroids to promote an increase in muscle mass as well as enhancement of physical performance.

In order to diagnose virilization, a doctor will take into account a woman’s medical history and all the presenting signs and symptoms. A blood test can reveal whether or not the levels of androgens in the body are increased. Sometimes, undergoing MRI or CT scan of the adrenal glands may be warranted.

Since there are many different things that can be blamed for virilization, treatment for it can vary. For instance, the removal of tumors in the adrenal glands can help restore the normal levels of hormones, thus putting an end to virilization. If male supplements are to blame, stopping their intake can help reverse the condition.

What Will Happen If You Stop Eating Fast Food?

Toned Back Routine to Get Rid of Bra Bulge

How Your Body Clock Make Or Break Your Health

Why Witloof Should be Incorporated Into Your Diet