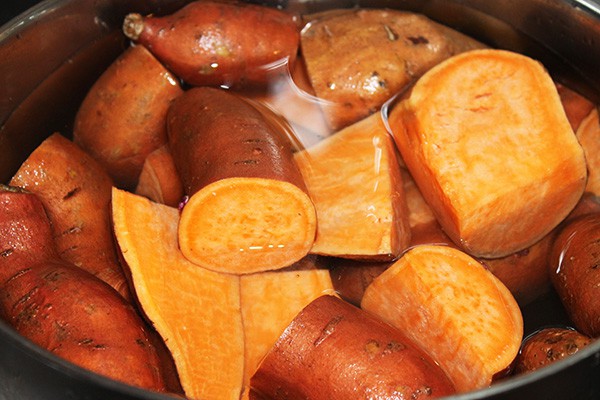 How to Make and Use Coffee Scrubs for Gorgeous Skin

Should You Wear Sunscreen Even If You Have Dark Skin?

Are you looking for a way to combat those excess pounds without shelling out tons of money and putting up with all sorts of unwanted side effects that many weight loss supplements are notorious for? Recently in Japan, a study conducted revealed that something cheap and side effect-free may potentially help humans slim down.

The weight loss agent is something that you normally throw away during the Holidays or just about any other time of the year when you want to please your taste buds — it’s sweet potato water!

It Can Help Suppress the Appetite

First things first: no one really consumes water used for boiling sweet potatoes. While all the boiling caused whatever bacteria present in the water as well as skins of the sweet potatoes to be killed off, the truth is nobody who boils sweet potatoes had looked into the possibility of attaining certain benefits from drinking it.

Well, scientists in Japan recently discovered that the consumption of sweet potato water may help humans get rid of excess pounds by causing the suppression of one’s appetite.

A Staple in Japanese Diet

You see, sweet potatoes are one of the many healthy staple foods in the usual Japanese diet. Also, it is said that up to 15 percent of all sweet potatoes in the Land of the Rising Sun are turned into potato-starch based food products as well as various processed foods and even distilled beverages.

The massive manufacturing of products that are sweet potato-based causes the production of waste water that is dumped into the rivers, lakes and oceans, and Japanese scientists are worried that the planet is suffering for it. Water used for the processing of sweet potatoes in various ways has compounds that can be detrimental to the environment.

Naturally, scientists in Japan found out the repercussions of dumping of water used for sweet potato processing by doing numerous studies on it. However, a study also revealed that sweet potato water may aid in weight loss!

Japanese scientists performed several different tests on the mice after about a month. They found out that those who were provided with water containing high levels of sweet potato peptide protein had lower body weights!

According to their findings, laboratory mice who received water with high levels of sweet potato peptide protein had reduced appetite, and this prevented them from eating more food than necessary.

Furthermore, the metabolism of the said mice were much faster than those who were given water containing low levels of sweet potato peptide protein. Japanese scientists who conducted the study said that it was due to the increased amounts of leptin and adiponectin, both of which are hormones that regulate satiety and the metabolic rate.

Do take note that the amazing effects of sweet potato peptide protein on the body were found in laboratory mice, and studies on its effects on humans have yet to be initiated.

Also Read   Make Your Hair Grow Faster with These Tips

Japanese scientists added that mice provided with water containing high levels of sweet potato peptide protein also had lowered triglyceride and cholesterol levels, which could indicate reduced risk of deadly heart disease. Also, they discovered that fatty tissues and liver mass were both reduced in the said group of laboratory mice.

Scientists involved with the study said that the very promising results may eventually benefit humans who are struggling to eliminate excess pounds, and help reduce their risk of health problems linked to obesity.

Sourcemomonamission.me
Previous article
Signs That You Need to Welcome the Sun More Into Your Life
Next article
Health and Beauty Benefits of Borage Oil

The Different Types of Tummies and How to Deal With Them

Face Masks for Glowing Skin for Your Teens

What are the Best Ingredients for Your Skin Type?