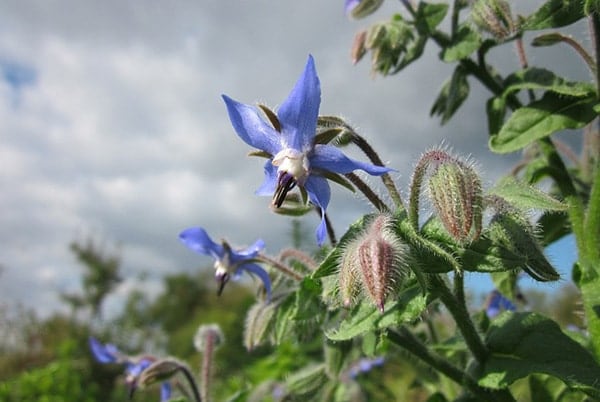 Keep Blackheads at Bay With These Essential Oils

In the world of alternative medicine, borage oil is getting a lot of attention and respect. That’s because it is one of the oils that pack the highest amounts of gamma-linolenic acid or GLA, which is a potent anti-inflammatory agent. Due to its popularity, you can easily obtain a bottle of borage oil at your favorite health food store, online or offline.

Before we discuss the so many health benefits offered by borage oil, let us first briefly get to know the plant where it comes from, shall we?

Actually, borage is a very popular culinary herb especially in Mediterranean cooking. It is a plant that is widely cultivated in Europe, but also grown in certain parts of North America as well as Asia. Borage is also sometimes called bee bread and bee plant. Since it bears blue-colored flowers in the shape of stars, the plant is known as starflower, too.

Possessing an aroma that is somewhat similar to cucumber, borage is commonly used for whipping up sauces, garnishing salads and even making candies. The young and tender leaves of the plant are usually eaten as vegetables, but older leaves are not really suitable for consumption as they’re very tough and bitter-tasting.

Now that you are more acquainted with the borage plant, it’s time to tackle the perks it offers in oil form:

It Fights Various Disorders of the Skin

Borage oil is popularly used topically for the treatment of an assortment of skin disorders, in particular the inflammatory kinds. For instance, traditional healers use it for dealing with eczema because of the fact that it contains GLA — it relieves eczema symptoms by reducing inflammation as well as soothing and hydrating affected areas of the skin.

Also Read   How to Make Sunscreen Spray at Home

Speaking of hydrating, borage oil can actually be used as a skin moisturizer — and it’s mild enough to be applied on the face! Aside from having GLA, borage oil is also loaded with vitamin C. We all know that vitamin C is an antioxidant so excellent in fighting those skin cell-damaging and aging-accelerating free radicals.

Borage oil may be applied on the scalp to treat dandruff, in particular the kind that’s due to a fungal infection. The said oil is also an amazing remedy for folliculitis, which is the inflammation and damage of the hair follicles. You don’t want to have folliculitis as it can result in hair fall and eventually hair thinning.

It Promotes a Stronger Immune System

Since borage is a common culinary herb, it’s no wonder why oil derived from it may also be taken internally (limited to about 500 mg for starters) to help strengthen the immune system. Again, it’s for the fact that borage oil contains vitamin C. Thanks to this essential oil with a pleasing smell, your risk of infections and allergies can be reduced.

Traditional healers also employ borage oil for the regulation of sugar levels in the blood. Having high sugar levels is not a good thing because it deprives the cells of the energy they require, plus it can wreak havoc to some of your organs in the long run. Needless to say, borage oil can be very helpful for those with diabetes and pre-diabetes issues.

It Reduces Pain and Swelling of Joints

Because borage oil contains impressive amounts of anti-inflammatory GLA, it may be used for managing those painful and swollen joints. A lot of people bugged by rheumatoid arthritis reported that borage oil helped in considerably reducing the symptoms in just 6 weeks of regular treatment with it.

It Helps Enhance Concentration and Focus

Healthy fats in borage oil can help boost concentration and focus, say experts. In fact, some doctors actually recommend borage oil for the reduction of symptoms of ADHD. But you don’t need to have the said disorder just to benefit from borage oil as you can take advantage of it whenever you require intensive cognitive functioning.

Sourcebeautynaturalsecrets.com
Previous articleSweet Potato Water: The Latest Weapon Against Excess Weight?
Next articleBlackheads and Recipes to Remove Them