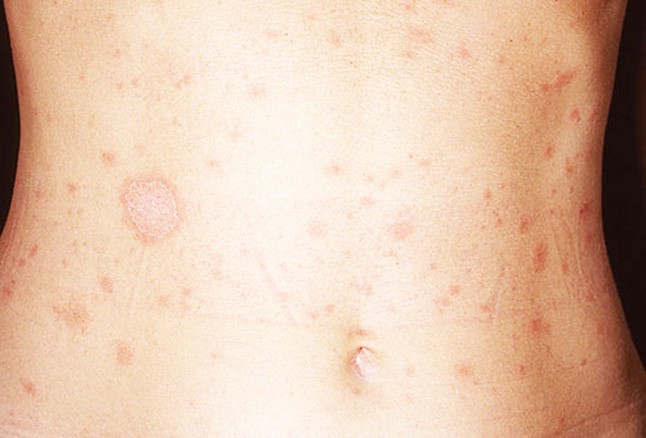 Have Your Best Lipstick Ever in 8 Easy Ways!

There is a common skin problem known in the medical world as pityriasis rosea. It is characterized by a single large pink or red spot on the abdomen, chest or back, followed by numerous smaller patches in the same shape and color. The large rash (called “herald patch” or “mother patch”) and smaller patches (also referred to as “daughter patches”) form in a special way, causing them to resemble a fir or palm tree.

Even without treatment, pityriasis rosea tends to go away on its own. The characteristic rash tends to stay around for 6 to 8 weeks. However, based on some cases, the skin condition may go away in as early as 2 weeks, or linger for up to 10 weeks. What’s more, pityriasis rosea does not leave behind scars, although people with dark skin color may notice some brown-colored spots after the rash clears, but they will disappear eventually.

It’s very important to note that pityriasis rosea that shows up during the early stages of pregnancy may pose some risks. Some pregnant women who have pityriasis rosea may suffer from miscarriages or premature delivery. In case a pregnant woman develops a rash, she should inform her doctor about it right away to avoid complications.

No one really knows why pityriasis rosea forms. However, medical professionals are quite sure that it’s something that is not caused by bacteria or fungi, although it is possible for it to be caused by a virus because, in some instances, the development of pityriasis rosea coincides with a viral infection like a cold or flu.

Also Read   Unknown Beauty Perks of Sleeping on Your Back

The good news is pityriasis rosea is not a contagious skin problem, which means that a person who has it cannot transfer it to a person who doesn’t have it by physical contact or any other means.

Just about anyone can have pityriasis rosea, but it is said to be more common in teens and young adults, usually those who are between 10 to 35 years of age. According to experts, pityriasis rosea is more common in men than women. Most people will experience the skin problem only once in their lives, but repeated episodes may be encountered by about 1 in 50 people, according to reports.

Initially, a large pink or red spot appears on the abdomen, chest or back, although it may appear elsewhere on the body, too, but that rarely happens. The said spot tends to be scaly, and the border is somewhat raised. Experts call this the “herald patch”. Some skin specialista may refer to it as the “mother patch”.

Some people may feel unwell and have fever and headaches a couple of days just before the herald or mother patch shows up. These symptoms usually go away as soon as the large patch appears.

After a few days, a skin rash appears. The smaller patches, which are also called “daughter patches”, form around the herald patch in a particular way — causing the formation of a shape that resembles a fir or palm tree. The rash may spread across the arms and back. The face is usually not affected but there is a possibility for the rash to appear on it as well. Do take note that the rash may appear dark brown, black or grey in people with dark-colored skin.

Because pityriasis rosea tends to go away on its own in 6 to 8 weeks, it usually requires no treatment. However, someone who has the skin problem may experience itchiness. When such happens, a doctor may prescribe antihistamines or sometimes steroid creams to minimize the said symptom.

It is possible to deal with the itchiness even without the administration of pharmaceutical solutions. For instance, someone who has pityriasis rosea may apply emollients on the rash to provide moisture and relieve itchiness, but there should be no irritating ingredients present. The use of mild soaps and other personal care products can also help.

Sourcewebmd.com
Previous article
Why Ditch Soy Sauce and Switch to Coconut Aminos?
Next article
Should You Use Beauty Products Containing Placenta?

How to Remove Your Writer’s Block

What are the Warning Signs of Osteoarthritis?

Activities That Can Help Curb Your Appetite