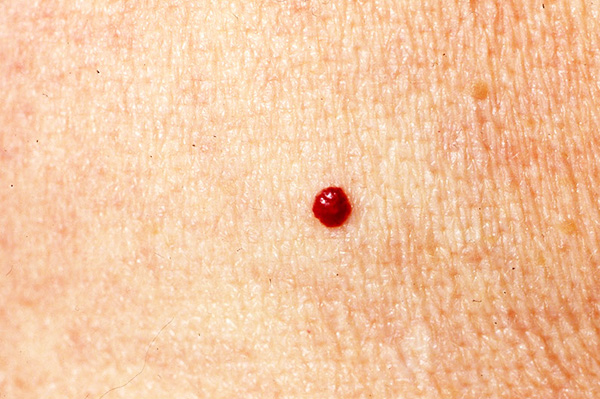 Cherry angiomas are small growths on the skin that appear bright red, although they can also take on other colors such as pale red, purple and even black. The good news is they are almost always benign, which means they are not cancerous. However, they can multiply — usually appearing first on the trunk and then spreading upwards, including the face.

Kids rarely develop cherry angiomas. Commonly, they are seen in adults over 30 years old. When they get past 40, more of these growths can be expected to form. By the way, they can be as small as pinheads although it’s not unlikely for some of them to be much bigger, but usually no larger than a quarter of an inch across.

Medical experts say that cherry angiomas form due to the weakening of the walls of the capillaries, which are the smallest blood vessels, found in the skin. Capillaries tend to weaken as a person ages, and this is why cherry angiomas are commonly associated with older people — that’s why they’re also sometimes referred to as “senile angiomas”.

It is also said by the experts that cherry angiomas tend to run in families, which means that genetics is a role player in the development of these growths. They also suspect that a few other risk factors are involved, such as hormonal imbalance, exposure to toxins or certain chemicals, liver dysfunction, and excessive sun exposure.

While it’s true that cherry angiomas are usually benign, they can be regarded by many as problems cosmetic-wise. Also, it is very much possible for these growths to become irritated, or bleed and wind up infected. Such can happen if you habitually pick on them, accidentally scratch them, or carelessly shave over them.

Also Read   Reasons for You to Try Arracacha Soon

One of the most popular conventional treatments for cherry angiomas is a procedure called “shave excision” which entails the removal of the angiomas with the use of a very sharp razor. Those growths may also be burned (electrosurgery) or frozen (cryotherapy). These days, cherry angiomas may also be removed by means of laser treatments.

There are also some all-natural ways to get rid of cherry angiomas, perfect for budget-conscious people as well as those who would like to dodge the risks associated with conventional treatments. If you have cherry angiomas that you would like to eliminate, the following some of the things that you may try at home:

Whip up small cotton balls and dip them in apple cider vinegar — the kind that’s raw, unfiltered and organic. Wring out the excess and neatly place those cotton balls on your cherry angiomas, securing them with small pieces of duct tape. Allow them to stay there for up to half an hour. Perform this twice a day until you see the desired results.

Numerous skin problems can be remedied with the simple application of tea tree oil, and cherry angiomas are included. A lot of people swear that their cherry angiomas went away after regularly daubing tea tree oil on them. If you have sensitive skin, it’s a good idea to dilute tea tree oil with carrier oil, like coconut oil or olive oil.

Also Read   Get to Know the Different Causes of Hemorrhoids

Since the formation of cherry angioma is sometimes associated with toxin exposure, it’s a good idea for you to switch to a healthier diet to make those growths go away. Include more fruits and vegetables in your everyday diet and eliminate processed and junk foods. Also, drink plenty of fluids daily and stay physically active.