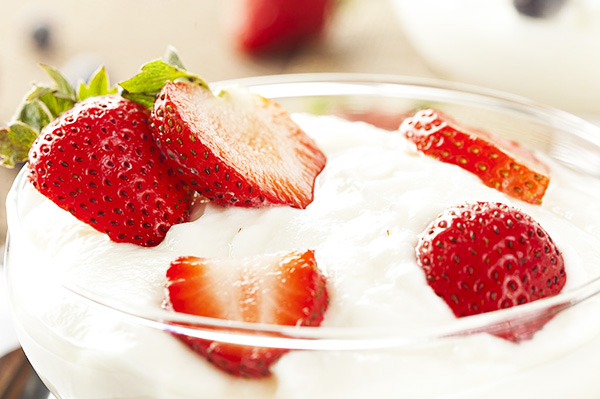 Benefits of Vegetables and White Fruits

Stop Watching TV While Eating and These Things Will Happen

Get Your Cheeks Glowing with These 10 Blush Tips and Tricks

Yogurt is one of the familiar names people say and hear when it comes to sweets and desserts. Although sweets are associated with dental problems and sore throat, yogurt is beneficial to the body. The following are health benefits and sample recipe for yogurt.

Two nutrients that are present in yogurt are protein and calcium. Protein is a macronutrient, with carbohydrates and fats as the other two. Protein is responsible for the growth and repair of tissues and cells like muscles and bones; also, it serves as an energy source in case carbohydrate and fat reserves as low. Meanwhile, calcium is a mineral that is associated with bone health. This means increased calcium intake of the body means stronger and healthier bones and teeth.

One health benefit of yogurt is the promotion of digestive health. According to Authority Nutrition, yogurt contains probiotics, which help reduce bad bacteria in the digestive tract. As per the publication, probiotics like Lactobacillus and Bifidobacteria have proven their abilities to reduce the discomfort from conditions like irritable bowel syndrome or IBS. In one study, participants were asked to consume yogurt with Bifidobacteria or fermented milk regularly. After thee weeks, as cited by the publication, the trial participants reported improvement in stool frequency and blooating; then, effects were seen following six weeks. Another data supported yogurt’s digestive health benefit. The study revealed that yogurt with Bifidobacteria

Weight loss is another benefit of eating yogurt. According to Fitness Magazine, consuming 18 ounces of yogurt daily helps reduce one’s waistline. As per the trials conducted in the University of Tennessee, Knoxville, people who ate that amount lost 22 percent more weight and 81 percent more belly fat that those who skipped their snacks. Also, they had one-third more lean muscle mass. Nutrition professor Michael Zemel, as cited by the publication, also explains that fat around the waist produces the hormone cortisol, which tells the body to gather more fat in the area. So, eating yogurt helps counter the problem.

Yogurt also benefits the skin. According to dermatologist Hema Sundaram, as cited by Health, yogurt contains lactic acid, which is a component in some in-office chemical peels. Sundaram added that the agent mildly exfoliates the top layers of the epidermis, which can remove discolorations and blemishes, in addition to reducing fine wrinkles. As per the publication, the person may mix Greek yogurt with almond or olive oil and a tablespoon of honey. The mixture can be applied to the face and is left on for 20 to 30 minutes before rinsing and patting dry.

A recipe that makes use of yogurt is Fudgy Yogurt Brownies. According to Bonappetit, the ingredients include a cup of all-purpose flour, half teaspoon of baking powder, one-fourth teaspoon salt, a cup of semisweet chocolate chips (divided), six tablespoons or three-fourth stick unsalted butter, a cup of granulated sugar, half cup of cocoa powder, one teaspoon vanilla extract, and a cup of plain whole milk Greek yogurt. To prepare, as per the publication, the oven is preheated to 350 degrees. Next, the butter and flour are used to grease a baking pan. Then, the flour, salt, and baking powder are whisked in a large bowl. After that, half cup chocolate chips and butter are combined in a large stainless-steel bowl. Then, the bowl is set over a saucepan of water and the chocolate and butter are stirred until melted and smooth. After that, the bowl is removed from heat and the sugar, vanilla, cocoa powder, and yogurt are whisked. The wet ingredients are folded into dry ingredients and the remaining half cup chocolate chips are folded in. Once done, the mixture is poured into prepared pan. Then, the dish is baked for at least 25 minutes. Finally, the brownies are cut into square with a sharp knife.

Yogurt is considered nutritious with its health benefits. Thus, it can be readily added to the weekly meal plans for the entire family.

Sourceeatthis.com
Previous article5 Ways to Improve Your Life
Next articleRemedies for Wrinkle-Free Skin

How to Make Yourself Love Running More

Celery Juice is Trending, But Should You Really Drink It?