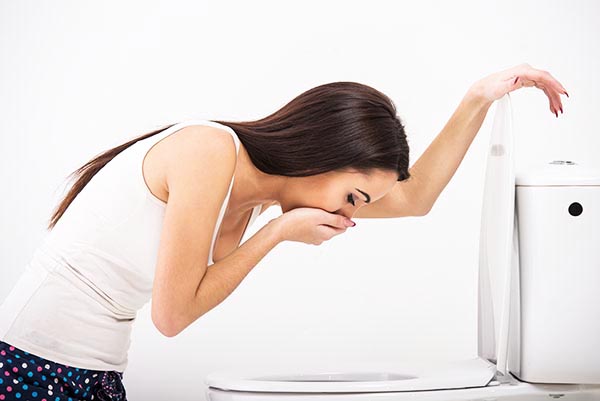 Tips for Protecting Your Hair from the Harsh Summer Sun

Vomiting, also known as emesis and throwing up, is one of the common ailments of children and adults. One of the gastrointestinal disorders, vomiting refers to the involuntary and forceful expulsion of the stomach contents through the mouth and sometimes, through the nose. The result is a general feeling of unwellness, with a risk of aspiration. The following are causes, associated signs and symptoms, and home remedies for vomiting.

Vomiting has a number of causes. According to News Medical, these include digestive or gastrointestinal tract problems like food poisoning and pyloric stenosis or obstruction of the stomach, inner ear and nervous system problems like vertigo and Meniere’s disease, brain and central nervous system problems like head injuries and migraine, electrolyte and metabolite alteration like increased potassium and calcium in the blood, pregnancy, viral infections like chicken pox and swine flu, medications like antidepressants and chemotherapeutics, drug abuse, anxiety, depression, fear, severe pain, headaches, heart attack, and excessive exercise following a full stomach, among others.

Vomiting is characterized by the involuntary and forceful expulsion of gastric contents through the mouth or nose. Associated symptoms are nausea, diarrhea, and fever, which may indicate acute gastroenteritis and/or influenza. According to Mayo Clinic, one must consult a doctor if nausea and vomiting come with other signs and symptoms like severe abdominal pain, chest pain, blurred vision, fainting, high fever, cold and clammy skin, stiff neck, and fecal material or odor in the vomitus.

While medications like anti-emetics can be prescribed by the doctor and given to prevent a vomiting episode, the condition can also be managed with certain remedies that can be done at home.

One remedy for vomiting is ginger root. According to Style Craze, Asians learned about the spice’s healing properties during the early civilization and they have been using it to sooth digestive ailments. As per the publication, the person takes a piece of ginger root and chews it to ease vomiting. As per the publication, it can be taken with a spoon of honey while chewing it; it may mask ginger’s spicy flavor.

Aside from bread, cinnamon can also be used as remedy for vomiting. According to Top 10 Home Remedies, cinnamon helps sooth the stomach and combat nausea and vomiting secondary to digestive issues. As per the publication, the person adds half to one teaspoon of cinnamon powder in a cup of boiling water. Then, it is allowed to steep for a few minutes. Next, the water is drained and a tablespoon of honey is added. Then, the resulting mixture is sipped slowly. While it is part of the remedies for vomiting, it may not be a great choice of beverage for women.

Another remedy for vomiting is fluid consumption. Since electrolyte imbalance is a concern when it comes to vomiting, drinking water or fruit juice helps provide water to the tissues and cells and prevent dehydration and its symptoms. As per Find Home Remedy, drinking plenty of water helps maintain the body’s health and position; however, fluid intake should not be excessive because it may stretch the stomach and worsen nausea and vomiting. According to Medicine Net, one to two ounces of fluids at a time may be taken every ten to 15 minutes. The person should wait for 20 to 30 minutes before another fluid intake if vomiting recurs.

Vomiting is one of the frequent digestive problems in children and adults. If the episodes are recurrent and persistent, it is best to seek medical consult for proper assessment, diagnosis, planning, intervention, and evaluation. This way, complications like dental corrosion, aspiration, and dehydration can be prevented.

Sourcepracto.com
Previous articleAge Spots Begone with These Natural Remedies
Next articleOils to Use from Head to Toe

Does It Feel Like You Have a Lump in Your Throat? Read On and Learn More About It