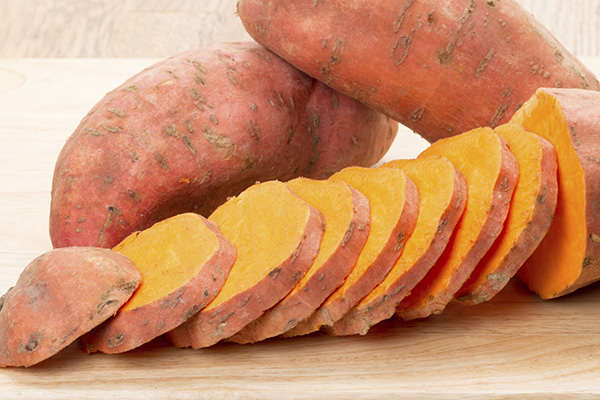 Yoga: Oils Your Gears Efficiently and Gently Prior to Running Exercises

Sweet potato is one of the common energy-giving foods people have today. It is usually eaten for breakfast or snacks for energy. With the scientific name Ipomoea batatas, sweet potato is a dicotyledonous plant belongs to the Convolvulaceae family. The following are the health benefits and sample recipe for sweet potato.

One health benefit of eating sweet potatoes is vitamin A, the vitamin that promotes vision and skin and mucus membrane integrity. According to World’s Healthiest Foods, several clinical trials have revealed that “superior ability” of the potato to improve blood levels of vitamin A. As per the publication, this may be true for children since various studies in Africa revealed that every 3.5 ounces of sweet potatoes were found to have between 100 to 1,600 micrograms of vitamin A, which is seen as capable of meeting 35 percent of all vitamin A needs and more than 90 percent of vitamin A needs.

Another health benefit of sweet potatoes is vitamin C. vitamin C raises the body’s immune system function, protecting it from infection and illnesses. To add, vitamin C improves the function of collagen, a cement-acting substance that helps bind loosely connected cells and tissues; it helps delay the signs of skin aging, such as fine lines and wrinkles. According to Care 2, vitamin C also helps speed up wound healing and it plays a vital role in blood cell formation, bone and tooth formation, and digestion. As per the publication, the vitamin also helps protect the body from toxins that may lead to cancer.

While sweet potatoes have the word “sweet,” it ironically helps manage diabetes mellitus. According to Medical News Today, sweet potatoes have low glycemic index, not to mention that recent studies suggest that they help lower episodes of low blood sugar and insulin resistance in people with the disorder. As per Care 2, the natural sugars in sweet potatoes are slowly released into the bloodstream, preventing sugar spikes associated with weight gain. In addition, sweet potatoes contain fiber, which helps lower blood sugar and blood cholesterol. Fiber also helps the body get rid of unwanted agents like toxins and free radicals and it also adds roughage and bulk to stools, facilitating better elimination and preventing digestive problems like constipation, hemorrhoids, and diverticulitis. As per the publication, one medium-sized sweet potato contains six grams of fiber.

One health recipe that uses sweet potatoes as ingredients is Curried Carrot, Sweet Potato,and Ginger Soup. According to Health, the ingredients include three cups of half-inch cubed peeled sweet potato, one cup and a half of one-fourth inch sliced peeled carrots, one tablespoon grated ginger, two tablespoons of curry powder, three cups fat-free and low-sodium chicken broth, two teaspoons of canola oil, half cup of chopped shallots, and half teaspoon of salt.

To prepare, as per the publication, oil is heated in a large saucepan over medium-high heat. Next, the shallots are added and sautéed for three minutes or until it becomes tender. Then, the carrots, potato, ginger, and curry are added and cooked for two minutes. Once done, the broth is added and brought to a boil. The broth is covered, heat is reduced, and then simmered for 25 minutes or until the vegetables become tender. Then, salt is stirred in. Half of the soup is poured in a food processor and is pulsed until smooth. The procedure is repeated with the remaining soup.

With its health benefits, sweet potato is considered healthy to the body. Thus, it can easily be added to various meal menus for families and friends.

Got Stretch Marks on Your Behind? Try These Effective Tips