What You Need to Know About Gua Sha 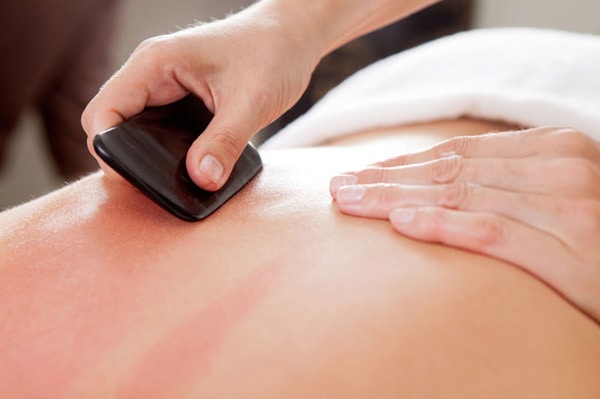 Fight Heart Disease, Diabetes, and Cancer with these Alkaline Foods

Have you heard about gua sha? It’s been quite controversial recently. Its rather morbid technique is said to be a miraculous form of healing. Gua sha is done by scraping the skin with a blunt tool to relieve pain.

Gua sha is an ancient Chinese medical therapy. For 2,000 years, Chinese mothers have been doing it as a home treatment whenever their children get sick. From the East,it is now being widely known in the West. Today, traditional Chinese medicine practitioners have been performing gua sha throughout the world.

In the beginning of the treatment, a specific kind of oil is lathered onto protect the skin, detoxify, or relax the patient; the condition of the patient would identify the needs and requirements. To start the procedure, the practitioner scrapes or press-strokes the skin using a blunt but smooth-edged instrument made of jade, horn, or metal.

The practitioner scrapes or press-strokes in one direction only, repeating until red marks appear. From the color, it can be assessed if the blood stasis isfreshorifit’s a severe stagnation. If it’s the first, the marks would be lighter red, and for the latter, it would be darker orin some cases even purple or black. It really would vary from one patient to another, so it should not cause alarm.

Just for the last 10 years, there have been over a hundred studies on the effects of gua sha especially on several musculoskeletal problems like back pain. For instance, the most recent that was done a couple of months ago investigated the therapeutic effects of gua sha on patients suffering from chronic neck and lower back pain. Forty patients were divided into two groups – one received one gua sha treatment while the other did not. Results showed that compared to the other group, the patients who received treatment experienced a significant pain reduction and improved health condition overall.

Another research done in the University of Duisburg-Essen reported positive results as well. Many patients stated the pain relief lasted even more than 7 days after the treatment. In one instance, a woman who initially rated her back pain as 7 on a 10-point scale reported not feeling any pain at all after her gua sha session. One of the researchers said muscle tension had been eliminated and the heaps of tight muscles disappeared.

Last year, German researchers did a study involving 48 patients experiencing neck pain. Seven days after the gua sha treatment, they also reported suffering from lesser pain. The study concludes that this specific treatment has obvious short-term effects on pain and functional status. However, its long-term value is not yet determined.

Aside from the effects of gua sha on musculoskeletal pain, other studies also reported its potential anti-inflammatory and immunological properties. One study conducted in Harvard in 2011 suggested that gua sha reduced liver inflammation in chronic active hepatitis B.

While there have been numerous studies on the benefits of gua sha in managing pain, experts stated that more evidence is needed.

The procedure of gua sha is not the only thing that’s controversial about this ancient Chinese therapy. After a gua sha treatment, the patient would have visible and severe marks. These marks have been mistaken as bruises or rashes, but practitioners call them petechiae. Experts say that bruises are caused by a distressing bleeding and injury of the tissues. On the other hand, the red marks left show the flight of RBCs in the surface tissue. These marks scare patients who are seeking for a different formof pain reliever than the usual pill. However, these marks will disappear 3 to 7 days after.

Also Read   Get Rid of Carpet Stains with these Home Remedies

There were also a few patients who expected alleviation of pain after the treatment but only experienced uncomfortable pain even after days.

TCM practitioners that these painful encounters should only be isolated cases because gua sha should not be painful. Although there would be an immediate shift of pain after,it should not be prolonged. Dr.Arya Nielsen, director of acupuncture at Beth Israel Medical Centre’s Department of Integrative Medicine in New York, submitted safety protocols and guidelines for gua sha therapy to extinguish risks and maintain high-quality standards ofthe practice. She supported that pain should not be a part of the experience of the patient. Pain maybe because of the absence of communication between the practitioner and the patient. Since patients vary in degrees of pain, practitioners should be consistently asking for feedback.

Since the treatment uses tools and instruments, it’s important and required that they be sterilised. Some practitioners even use disposable instruments to eliminate the chance of infection.

While response of the patients’ bodies may vary, it is normal that symptoms would occur after. Some of the symptoms include sudden change in pain, range of motion, fever, nausea, vomiting, coughing, and wheezing among others. The symptoms should not put the patients in serious danger.

Is gua sha for you? If you are suffering from sunburn, rashes, wounds, or if you have mole clusters or pimples in the area, you should avoid the treatment altogether. As for pregnant women, the opinions of practitioners are divided, but it’s best to take caution and postpone until you have given birth and recovered.

Also Read   Day Time Makeup Blunders
Previous article
What Do You Get When You Eat Bamboo Shoots?
Next article
Why Should You Start Eating Pistachios?

How to Naturally Prevent Premature Menopause

How to Make Hives Disappear Naturally