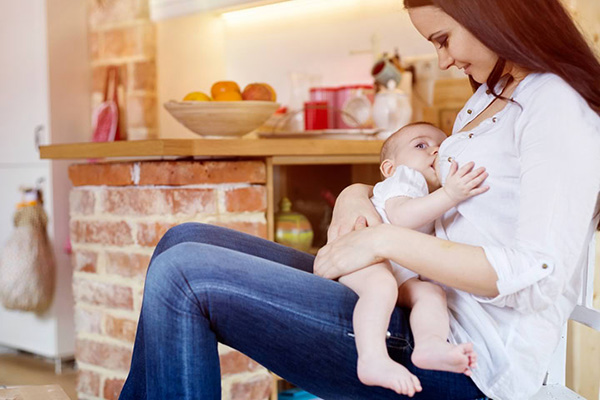 Stress, lack of sleep, poor eating habits — all of these things can cause a decline in the production of breast milk which, as everybody knows, is the ultimate source of nutrients for your growing and developing baby.

If you’re worried that your little one won’t be able to be properly nourished because it seems like your breasts are no longer producing copious amounts of milk, do your best to relax, grab every opportunity to catch some Z’s, and include more nutritious foods in your everyday diet to help boost breast milk production.

Similarly, you may also try consuming some herbal teas that are tried-and-tested effective for enhancing breast milk production, plus they won’t harm your baby. Here are some of those herbal teas to go for:

It’s common knowledge that ginger tea is excellent for relieving indigestion, nausea and vomiting. Did you know that it also helps in enhancing breast milk production? Thanks to its anti-inflammatory and antioxidant properties, a cup of ginger tea can help deal with issues that can cause your breast milk supply to run low.

Since it’s related to ginger, it doesn’t come as a surprise why turmeric is also beneficial for mothers who want to ensure that their babies are getting enough breast milk. A cup of turmeric tea is very easy to make — just dissolve half a teaspoon of it in a cup of hot water. You may also regularly sprinkle turmeric on your soups or salads.

One traditional remedy for low breast milk supply is rum with a few anise seeds in it. But you can skip the rum and just stick to anise seeds. If you want to take advantage of their ability to help promote breast milk production, simply allow a few anise seeds to steep in a cup of hot water. Strain afterwards and consume.

Also Read   Here's How you Can Avoid Shoulder Injuries during Workouts

In the Middle East and Mediterranean region, a lot of women swear by the effectiveness of taking fennel tea in increasing breast milk. Actually, they say that the said herbal tea doubles the amount of milk their breasts produce! What makes fennel tea so effective for such is it has the ability to regulate hormones in the body of a lactating mother.

Aside from boosting breast milk supply, blessed thistle tea is also known to help lift the mood and improve digestion, both of which breast feeding moms greatly need! Being a mother can be very stressful, and having a cup of blessed thistle tea can help in dealing with some of the negative effects of stress on the body and mind.

For thousands of years now, fenugreek tea is being consumed by women who are not happy with the amount of milk their breasts are producing. Actually, they say that this particular herbal drink can impress in just 1 to 3 days after its consumption. However, it’s a no-no for a pregnant woman to take fenugreek tea.

Unlike fenugreek tea, herbalists say that alfalfa tea is safe for pregnant and breastfeeding women alike. What makes this particular beverage effective for increasing breast milk supply is it has the ability to increase breast tissues. By the way, alfalfa tea is also great for combating an upset stomach.

CAUTION: Some of the above mentioned teas should not be consumed in high amounts even though they’re all-natural. It’s a good idea to ask your doctor or trusted herbalist about consuming any of the above herbal teas that are known to help increase your breast milk.

Also Read   Hair Coloring 101: What You Need to Know About Bleaching

Don’t forget to have this article reposted on social media to let your relatives and friends who are breastfeeding to know how they can have their breast milk production increased safely and all-naturally.

Sourcemomjunction.com
Previous article
How to Deal With Hangover Skin
Next article
Get a Streamlined Neck Without Paying for a Neck Liposuction

DIY Hair Toner Solutions to Do at Home