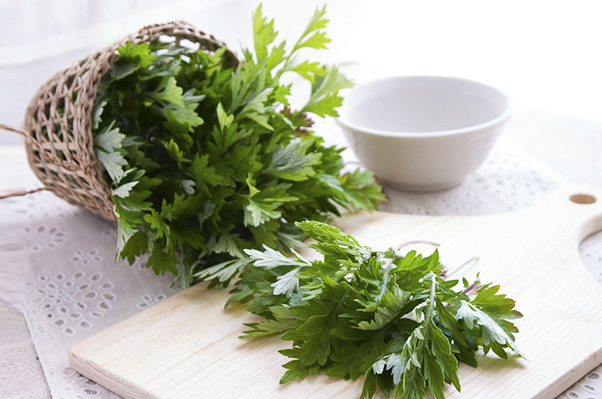 Mugwort is a well-known herb with superb medicinal properties. Other than being used for treating a variety of health problems, it’s also something consumed as a vegetable, usually added to fresh garden salads.

St. John’s plant and Chinese mugwort — these are some of the other names of the herb. Sometimes it is also called common artemesia, derived from its scientific name Artemesia Vulgaris. Quite obviously, it is named after Artemis, the Greek goddess of hunting, virginity, childbirth and the moon.

Customarily, mugwort is employed in the form of tea. Its dried leaves are chopped up and allowed to steep in hot (not boiling) water for several minutes. Adding a little honey may be done since it has a slightly bitter taste.

Here are some of the most noteworthy health and beauty benefits offered by mugwort:

Mugwort tea may be slowly consumed when you are having a bout of indigestion. People who are suffering from acid reflux and gastroesophageal reflux disease (GERD) may also rely on this herb to attain relief.

It Puts an End to Constipation

A lot of people take mugwort tea to maintain regular movement of the bowels. You may also simply add a few mugwort leaves to your various dishes in order to keep constipation at bay.

It Cures Other GI Tract Issues

Excess gas and bloating — a cup of mugwort tea can put an end to these, too. Traditionally, mugwort is also used for getting rid of parasitic worms in the intestines.

It Purifies the Body

Mugwort is traditionally employed for eliminating toxins and waste products in the blood. It’s exactly for this reason why the herb is known to help save the liver from being overworked and becoming damaged.

What makes mugwort capable of flushing out unwanted substances in the body is it possesses mild diuretic properties. Because of this, mugwort can actually be used whenever you are facing a urinary tract infection (UTI).

It Soothes the Nervous System

Suffering from anxiety and panic attacks? Then one of your all-natural defenses against it can be mugwort, which is known to help soothe the nervous system. Traditionally, it’s also used for controlling epilepsy.

Women whose periods are irregular may count on mugwort on a regular basis. As a bonus, the herb can help in providing relief from the nasty symptoms of premenstrual syndrome (PMS).

Mugwort is also known to help in balancing the hormones, and that is why it may be employed by women who are often bugged by pimples and acne most especially before, during and after their periods.

One of the nutrients found in mugwort is vitamin E. This nutrient is important for healthy scalp. By keeping the scalp in an excellent condition, you can end up with hair that really shines.

It Promotes Faster Hair Growth, Too

Mugwort is heaven-sent for those who suffer from thinning hair. That’s because this very common herb is known to help accelerate the growth of hair whether taken orally or employed topically.

Just a Few Words of Caution

Some individuals may be sensitive to the active compounds in mugwort. If they develop a few unfavorable side effects, the use of this herb should be discontinued right away. The employment of mugwort for therapeutic or medicinal purposes should be done with the help of an herbal expert to avoid problems.

Just like when planning on using any other herb out there, it’s a good idea for you to inform your doctor about your intention to use mugwort. This is especially true if you’re pregnant, nursing a baby, or diagnosed with a medical condition and taking prescription medications for it.

Best Sources of Iron for Women

Household Solutions that you can Use to Treat Bronchitis

Want to Get Fit Like a Ballerina? Here’s How