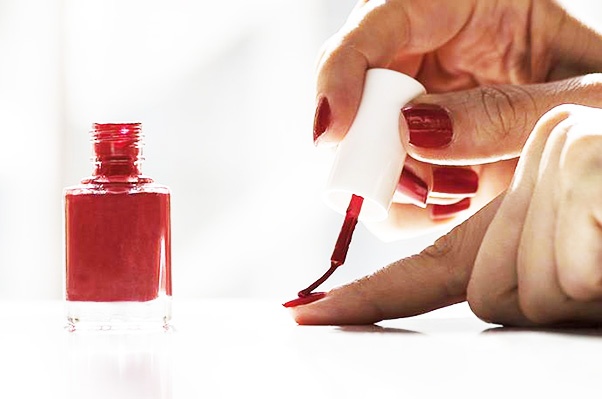 Women can’t help but play with their nails by painting them in various colors. And it’s not only that, but it seems that many are going gaga over nail art hence they take some time in dressing their nails with glitters, gems, and even stickers to show off their beautifully done nails. There is nothing wrong with wanting to look pretty or wanting to show off your personal choice for art, but it seems that the nail polish that we frequently use may have some effects on our health that we are not completely aware of.

You may be wondering what makes your nail polish dangerous. Well, most of us don’t really pay much attention to what goes inside our nail polish, but when you do, you might be surprised that there are toxic chemicals used in them.

According to a study that was conducted by researchers from Duke University as well as the Environmental Working Group, applying nail color on your nails expose you to DPHP or diphenyl phosphate to appear in your system. This particular compound is created once the body has metabolized triphenyl phosphate or TPP which experts believe can cause hormone disruption.

The researchers checked the urine samples of their participants before as well as after getting a mani-pedi and they discovered that 10 to 14 hours after they had their nails done, their DPHP levels have risen seven times the normal number. Just imagine being exposed to a hormone disruptor that can alter your hormone production.

With customers becoming more vocal of the dangers of using nail polish, manufacturers slapped their bottles with toxin-free labels to ensure their customers’ safety, but several of these brands contained toluene which has been found to contribute to birth defects in women who are pregnant. The presence of dibutyl phthalate or DBP raised questions too as it has been associated with birth defects in animal testing.

If you are a frequent user of nail polish, then there is a reason for you to be alarmed especially when the toxic compounds present in your nail polish can seep and get absorbed into your skin. Even though you are using non-toxic nail polish, you can never be too sure if the company has removed all the possible hazards in their product or not. Scientists are still studying if there are any effects to being exposed to these toxic substances for a short period of time, but for those who get their nails done once in a while, this is not a cause for concern.

However, those who are in the nail art business may want to reconsider, or at least take steps to minimize their exposure to these dangerous substances, especially with their line of work. Women who are pregnant should think twice before having their nails done as the chemicals in nail polish may hinder the natural development of their baby.

The problem with regular cosmetics is that, even though they are regulated by the U.S Food and Drug Administration or FDA, they don’t necessarily require the company to test the ingredients prior to selling. Even the “non-toxic” label on nail polish bottles are not pre-approved by the department as well which means that, those that have this label on their brands, are not 100% true.

Exercising caution when using nail polish is recommended, and perhaps lessening the instances of applying nail polish can reduce your exposure to these hormone disruptors. If you wish to protect yourself from chemical exposure, it would be a good idea to reconsider your use of nail polish.

Sourceellamila.com
Previous article7 Amazing Self-Care Ideas You Should Be Doing Now
Next articleSupplements that Can Make Your Hair Healthier

What are Some of the Reasons for Belly Button Pain?

5 Teas to Drink for Radiant Skin

Beauty Trends From Around the World