Yoga Etiquette 101: Things You Should NOT Do in a Yoga Class 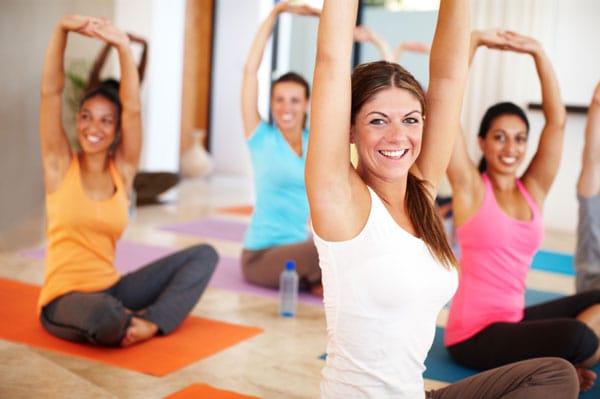 How to Perfectly Apply Eyeliner in Two Easy Steps

Hair Secrets That Are Not

MegWright
Congratulations on finally deciding to hit up a yoga studio! Or maybe, you’ve already been going for a while now but are still not familiar with the do’s and don’ts while attending a class. Regardless, as long as you try steering clear of these classic yoga fails, you’ll fit just fine alongside the other pro-yogis out there—
well until you try some of those hard balancing stances, that is. Read on and take note of the things you should NOT try to do in a yoga class.

1. DON’T be a primadonna and arrive late.

Arriving late at a yoga or any fitness class at that matter can be utterly disruptive, but coming in at two to three minutes after the start of the session can sometimes be seen as plain rude, because it can take a while to properly set-up for a class. Before hitting a yoga class, call the studio in advance to ask what time you should preferably arrive—most though will be suggesting that you arrive at least 5 minutes prior to the start of the class.

2. DON’T check your phone for calls, emails and other messages.

If there’s one un-spoken rule in all yoga classes that would be
“all electronic devices must be switched off”. People attend yoga sessions mostly to recharge and switch-off their connections to the outside world. So it’s almost always understood that all devices should be turned-off and packed away in your respective lockers so as to avoid any distractions during class.

3. DON’T go crazy with your perfume.

Forget body odor, spritzing yourself with perfume that’s too strong is often the most offensive smell in a studio. Remember that yoga studios are usually small, confined spaces, so never spray a strong perfume before your class.

4. DON’T remove your shoes inside the room.

It is generally expected that people will remove their shoes and socks if they’re planning to practice barefoot, however, it should be done outside the actual studio. If you get into thinking, keeping 20 pairs of sweaty shoes and socks inside a heated and cramped studio can pretty much lead to some offensive smells.

5. DON’T forget your yoga props before hitting the class.

If you keep on getting up and going into the other side of the studio to collect your yoga stuff, you are most likely to disturb even the most zen-ful of yogis. Most yoga studios will provide you with everything you need during class; so the only thing you need to do is grab them before the class starts—yoga mat, towels, strap, and even a block to help you get on with some of the difficult yoga moves.

There is nothing worse or more difficult than not having enough space to stretch out during a yoga class, so better ensure that your mat is properly spaced or distanced between your classmates. If you can, pull your mat so that you can spread your arms and legs without causing any collisions.

7. DON’T collapse into laughter no matter how awkward poses (or things) get.

Yes, we all get it–yoga involves some pretty awkward moves, particularly if you’re just a beginner. However, that should not give you the pass to collapse into giggles every time you catch the eye of your best friend who’s next to you. Stay cool, take a deep breath, control your laughter and think of the other people who are trying to relax while they’re on the class.

Most yoga classes end with a relaxation technique called shavasana. Often, the teacher will start handing out eye
pillows for this phase, so it’s a good idea to use another tissue as a kind of barrier between your own eyes and those eye pillows that are being used by a dozen different people on a weekly basis.

9. DON’T initiate a chat with your buddy.

This is never the time to plan your activities for the weekend or where you’ll go after class. In fact, it’s considered rude to even talk at all—let alone loudly during a yoga class. So zip your mouth and wait until the class finished.

10. DON’T leave a mess for someone else to clean-up.

Not playing teacher’s pet, but thanking the teacher is a simple act of politeness and even a sigh of good manners.
Also Read   Treating and Preventing Headaches the Natural Way
Previous articleWhy Juicing Can Sometimes Be Harmful: The Hidden He alth Effects of Juicing
Next articleDifferent Ways to Get Fit

Beauty Habits That Could be Bad for Your Health