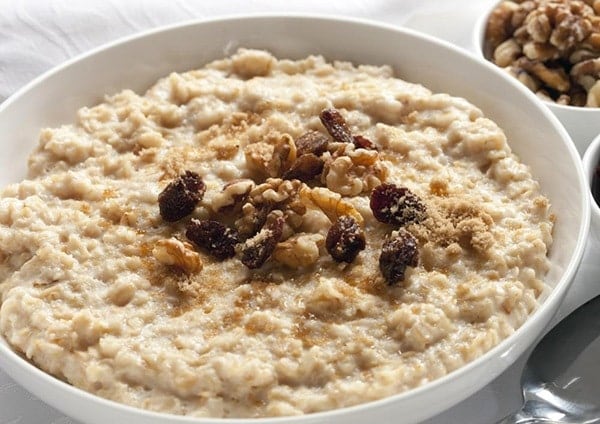 Natural Ingredients for Taking Care of Your Skin

Breakfast is considered as the first mean to be eaten following a night’s sleep and it is most usually taken in the early morning prior to undertaking the day’s work. Among the meals within 24 hours, it is generally believed that breakfast should not be skipped, since this is the meal that provides a person with energy, allowing him to do his activities throughout the day.

Clay Health Club and Spa nutritionist Erica Giovinazzo told Health that one wanted to aim for a breakfast that combined good carbohydrates and fiber with some protein. It is known that fiber is one of the main components of the human diet and it helps the body get rid of harmful toxins and chemicals by acting as sweep, cleaning the digestive tract. Fiber also helps promote digestion and regular bowel movement.

Oatmeal is one of the known high fiber meals for breakfast. As per Health, oats have beta-gluten, a kind of fiber that is known to aid in the reduction of the body’s blood cholesterol. In addition, oats are also excellent sources of nutrients like folate and potassium, as well as omega-3 fatty acids, which are good for the body’s cardiovascular system.

Oats are also easy to prepare, as they can be cooked for about 15 minutes; however, flavored oats should be avoided, as they could contain more sugar, among others. Instead of bad sugar, oats can be eaten along with fruits, nuts, and milk.

Sandwiches with peanut butter, along with eggs are also viewed as food choices for breakfast. According to Web MD, peanut butter contains both fiber and protein to help keep hunger in control. As per the publication, the spread can be spread over whole wheat or multigrain bread and topped with sliced fruits, such as pear, apple, or banana. Cashew or almond butter is also options while sunflower seed butter is a favorable choice for people who have allergy to nuts.

In addition to peanut butter, scrambled eggs can also be part of a hearty breakfast. As excellent protein sources, eggs can be added to chopped vegetables, such as broccoli, spinach, and artichoke, in addition to avocado. To boost the meal’s fiber content, whole wheat English muffin or a slice of whole-grain toast can be added.

High fiber breakfasts also aid to weight loss, according to Eating Well. As per the publication, such meals include savory breakfast muffins, which blends scallions, red bell pepper, and Canadian bacon; honey and goat cheese-filled fig muffins, which can be substituted with cream cheese; cranberry-almond granola, which can be substituted with walnuts or hazelnuts for the almonds, along with dried blueberries or chopped dried apricots for cranberries; almond-honey power bar, which contains oats, seeds, and roasted nuts coated with tasty almond butter; and the Greek Walnut Spice Cake, which combines ingredients like cloves, oranges, olive oil, whole grain flour, and walnut coffee cake.

Along with the aforementioned high fiber meals for breakfast, the food choices for lunch and dinner should also be carefully decided. In addition, proper diet should be joined with regular exercise, adequate rest and sleep, and right attitude.

Tricks for Clearer and Smoother Skin

How to Make Your Own Cosmetics