Do You Have White Bumps Under Your Eyes? Read on to Know What They Are 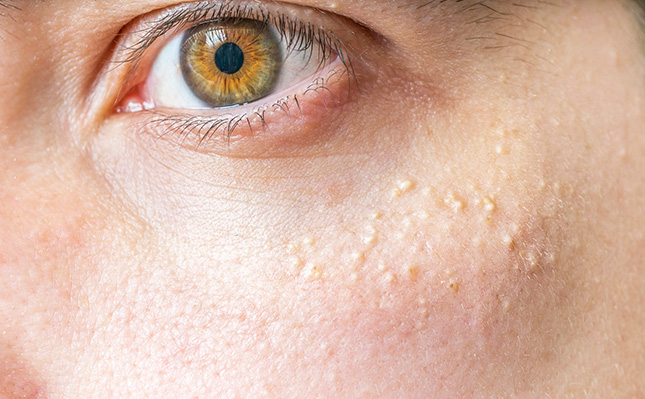 A Professional’s Guide to Maintaining Your Brows

Because the skin under your eyes is very thin and sensitive, it’s highly prone to developing a lot of cosmetic problems. One of those is the presence of white-colored bumps. If they’re bugging you, then this article is made exclusively for you. Read on to learn more about those unsightly white bumps.

Don’t forget to share this article on your different social media accounts afterwards most especially if you have lots of beauty-conscious family and friends.

There’s Actually a Name for Those

Skin care specialists refer to those white bumps under the eyes as milia. Actually, they can appear practically anywhere on your face and the rest of your body. However, in most people they tend to appear more often under the peepers.

If truth be told, milia are some of the most common aesthetic issues known to man. Yes, they’re mere aesthetic concerns, and this only means that they won’t put your health in any kind of danger. However, they can surely take away a huge chunk of your self-confidence!

Having Clogged Pores is the Reason Behind

Basically, milia are pores of your skin that has become clogged. Dermatologists say that the one to blame for such is what’s called keratin, which is a type of protein found on the topmost layer of the skin. If the name kind of rings a bell, it’s because keratin is also a component of your hair.

More often than not, milia form when the skin becomes irritated. It’s for this reason exactly why they may appear right after trying out a new cosmetic product, especially one with harsh ingredients.

Experts say that failure to exfoliate on a regular basis may also pave the way for the formation of milia. It’s because of this why it is a good idea to for you to exfoliate your skin once or twice a week in order to eliminate those excess keratin that can leave your pores clogged.

Milia and Acne are Not the Same

Some people refer to milia as baby acne. It’s for the fact that they can be seen on the faces of most newborns. They usually show up during the first few weeks of their lives and then go away on their own. However, they are definitely not acne despite of what many people call them.

If you have a baby with milia, you should refrain from attempting to get rid of those to make your little one even more picture-perfect. It’s perfectly fine for adults to treat their milia. However, it is a completely different story if they’re found on babies.

Refrain From Popping Them

Since they’re not acne or pimples, you should never attempt to pop them. They are white not because of pus, but hardened keratin. Trying to squeeze them will only lead to much bigger problems especially if your broken skin is invaded by bacteria and an infection strikes.

Also Read   Questions To Ask Before Joining a Gym

The truth is milia tend to go away on its own as your skin’s topmost layer is removed little by little. This means that patience can be considered as a treatment for them.

If you cannot wait for the day that you’re milia-free to arrive, skin care experts suggest for you to gently exfoliate the area under your eyes once or twice a week. Aside from using commercially-available exfoliating preparations, you may simply combine brown sugar and a little olive oil. Never exfoliate daily as it will surely irritate your skin.

Paying a dermatologist a visit is a good idea if you want an expert to do the job for you. There are many treatments for milia, and some of them include the use of a scalpel, blade, liquid nitrogen, retinoids and even laser.

Look Good Without Any Sleep