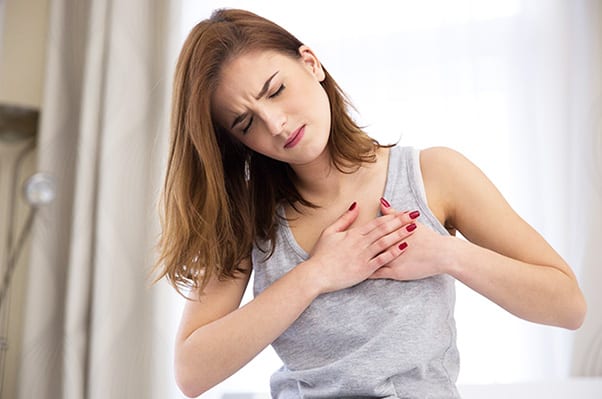 Quick Hairstyles for Your Active Lifestyle

There is a ring of muscle that is situated right where the esophagus and stomach meet, and it’s referred to by doctors as the lower esophageal sphincter or LES. The primary role of your LES is to keep the contents of the stomach inside the stomach. It’s not a good idea for anything in the stomach to flow back into the esophagus as it can cause the esophageal lining to become irritated, which is basically the reason why heartburn strikes.

Just like what the name suggests, heartburn can make it seem like your heart is on fire. Sometimes it registers as intense pain or tightening, and that’s why a lot of people easily mistake heartburn for a heart attack, prompting them to seek immediate medical attention.

So many things can be responsible for heartburn, ranging from acid reflux to pregnancy. Below you will come across some of the common reasons for a bout of heartburn.

Eating too much or consuming anything that’s acidic, spicy, greasy, caffeinated and carbonated can cause some of the stomach’s content to escape and go back up into your esophagus. It’s what’s known as acid reflux, and one of its hallmark symptoms is heartburn.

Steering clear of foods that can trigger an acid reflux is the secret to fending off heartburn. Acid reflux that happens all the time may eventually lead to GERD.

Short for gastroesophageal reflux disease, GERD is a long-term condition in which the LES is no longer carrying out its primary job, and that is to keep the stomach’s content inside it. Just like acid reflux, heartburn is one of the telltale signs of GERD.

Also Read   Are You Aware of the Different Types of Migraine?

The problem with GERD is it’s known to increase a person’s risk of suffering from serious issues concerning the esophagus, such as Barrett’s esophagus and also esophageal cancer.

Your diaphragm is a sheet of muscle that allows your lungs to inflate and deflate as you breathe. It also separates the chest and abdominal cavity. There is a small hole in the diaphragm where the esophagus passes through in order to connect with the stomach.

When a small portion of the stomach goes through that hole, what’s known as hiatal hernia strikes. One of its symptoms is frequent bout of heartburn.

If you are in the family way, it’s not unlikely for you to suffer from heartburn several times. That’s because the growing baby in your womb is applying an upward pressure on your stomach, making it so much easier for the content of the stomach to escape through the LES.

While there are antacids and various home remedies available for heartburn, it’s still a good idea for a pregnant woman to ask her OB which solution for heartburn is the safest for her and her baby.

Are you a smoker and frustrated that you are constantly having heartburn? Consider turning your back on cigarette smoking. According to health authorities, toxins found in cigarette smoking can cause the LES to weaken, thus keeping it from carrying out its job properly.

Heartburn may feel like a heart attack. If you are a smoker, it’s possible for you to have an actual heart attack than just a simple heartburn because smoking is a risk factor for heart disease.

There are certain medications that are notorious for causing heartburn. Some of them include non-steroidal anti-inflammatory drugs or NSAIDs for pain and swelling as well as certain types of antibiotics for infections.

Experts say that these drugs can irritate the lining of the esophagus and also increase the amount of acid produced by the stomach. Taking them with meals and with plenty of water, too, can help fend off heartburn.

How to Get Nail Polish Off Just About Anything

Using Sounds to Help You Get a Good Night’s Sleep

Beauty Myths That Are True

Here are Exercise Moves that Burn More Calories than Running