Blanching of the Skin: Causes and Other Important Matters 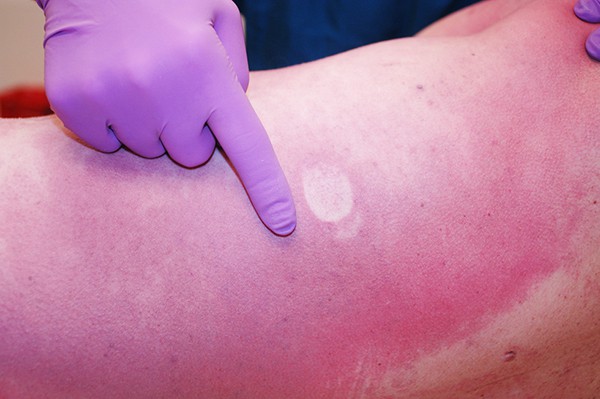 How to Remove Saddlebags

If you press an area of your skin with your finger, it should immediately return to its normal color as soon as you stop pressing on it. However, you may have the so-called blanching of the skin if the area that you pressed on remains white or pale in color for a little while after you have lifted your finger.

Quite obviously, blanching of the skin is due to an obstruction in the circulation of blood. Sometimes it’s a temporary matter, but there are instances, too, in which it calls for immediate medical attention. The likes of blood loss and severe infection, both of which can cause blanching of the skin, are emergency situations.

There are many different reasons why blanching of the skin occurs. Just like what’s mentioned earlier, there are cases when it’s something that is short-lived. But sometimes it’s something that stays around until the root cause of it has been properly dealt with, such as when proper blood circulation has been re-established.

One of the causes of blanching of the skin is Raynaud’s disease, which is characterized by spasms of tiny blood vessels that supply the skin with blood. Such usually happens when the person who has it is under a lot of stress or is exposed to low temperatures. Due to this, the skin fails to get enough blood.

Another usual cause of blanching of the skin is shock — no, not the kind that happens when you suddenly feel upset or surprised, but severe blood loss. Quite evidently, this is due to the reduced volume of blood in the body. There is another type of shock that can cause blanching of the skin — anaphylactic shock, a life-threatening allergic reaction.
Dehydration is also something that can lead to blanching of the skin. When a person is dehydrated, the volume of blood drops. After all, the liquid part of the blood which is referred to as “plasma” consists of up to 92 percent of water. With insufficient water in the body, it’s definite for problems concerning blood circulation to strike.

Other than the change in the color of the skin, it’s not uncommon for blanching of the skin to be accompanied with other signs and symptoms. Well, it all depends on the cause or condition behind it. Also, some of the additional signs and symptoms may indicate that the individual requires immediate medical attention.

Someone who is in shock, on the other hand, may have mental confusion or feel faint. His or her breathing may be altered, either slower or faster than normal. Aside from blanching, the skin may also feel cold and clammy to the touch. Shock can cause nausea, vomiting and absence of urine, too.

Because there are different reasons why blanching of the skin happens, treatment for it can considerably vary. In some instances, a blood test can reveal the medical condition behind it, thus allowing a doctor to determine the right treatment. Administration of IV fluids, blood products and oxygen are some other treatments.

Home care for blanching of the skin includes keeping the skin from the cold with the use of mittens, socks and thick or layered clothes. It’s important to keep the affected area always clean and properly moisturized. In the case of pressure sores involving bedridden people, frequent turning has to be done.

Sourcepinterest.com
Previous articleHealth and Beauty Benefits of Red Clover
Next articleSurgery: Tips on what to do after operation

Makeup Tips for Women with Freckles

Herbs that Can Cure Inflammation

Foods to Add to Your Diet