How to Bake Gluten-Free Whoopie Pies 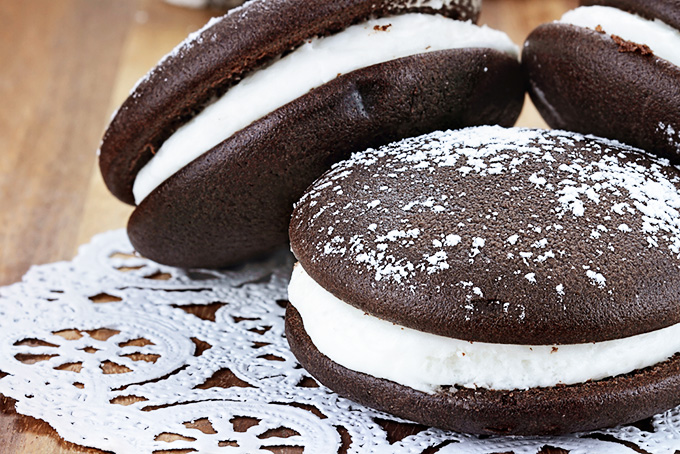 8 Foods to Boost Your Immune System

Are they cookies on steroids? Are they pies having identity crisis? No, they’re whoopie pies. They look phenomenal and they taste exceptional — who cares what they really are when they’re extra special?

Whoopie pies were born in the US, and they go by a bunch of names. Some people like to call them black moon, while others refer to them as gob. Then there are some who know these baked goodies as BFO, which is actually short for big fat Oreos. No matter what they’re called, whoopie pies still remain as one-of-a-kind treats.

One look at their mouthwatering appearance and it’s plain to see that whoopie pies are high in calories. It’s for this reason why they have to be consumed in moderation, most especially if you are watching your figure and health. But it’s okay to indulge your sweet tooth once in a while. Just don’t overdo it!

Here’s another problem that some people have with whoopie pies: they contain gluten. If you are allergic or sensitive to gluten, it’s for certain that the pleasure eating whoopie pies brings will be replaced in no time by some unfavorable signs and symptoms due to your body being glutenized.

But there’s hope for you: somewhere out there, a bakeshop is offering whoopie pies that contain no gluten. However, you may have to devote plenty of precious time, energy and gas to combing the entire city (or neighboring ones) just to get your hands on some gluten-free whoopie pies that you may enjoy guilt-free.

You can do that. Or you may simply head to your kitchen and start making your own whoopie pies that are devoid of gluten from scratch. Yes, it’s something possible!

Whoopie pies don’t look boring, so you can be certain that making them with your own hands in not going to be a picnic. But with patience and determination, it won’t take long before you get to treat yourself or surprise your family and friends with whoopie pies that are special because they do not contain gluten and you made them with lots of love.

Directions for making the cream filling:

Grab a medium-sized mixing bowl. Combine butter and vegetable shortening with the use of a hand or stand mixer. Stop only when they’re already fluffy.

Mix in 1 teaspoon of pure vanilla extract and the entire jar of marshmallow fluff. Mix very well until feathery.

Directions for making the whoopie cakes:

Have your oven preheated to 350ºF. Also, place the oven rack in the middle.

In the meantime, grab a 13-incher baking sheet and line it with parchment paper.

Also Read   Sensitive to Light? Here are the Common Causes

Reach for a large mixing bowl. Combine butter and brown sugar using a hand or stand mixer. Continue mixing until you end up with a light paste.

Afterwards, add the remaining teaspoon of pure vanilla extract and the egg. Continue mixing for a minute. Using a rubber spatula, scrape the sides and bottom of the mixing bowl.

Have half of the buttermilk added into the mixture. Mix until everything looks smooth. Add the remaining buttermilk and mix once again for about half a minute.

Get a scoop and neatly place 6 mounds of batter onto your parchment paper-lined baking sheet. See to it that they are a few inches away from each other because those whoopee cakes will expand as they cook.

Bake for about 15 minutes or until those whoopee cakes spring back when a finger is gently pressed on them.

Remove from the oven and place on a wire rack. Allow the cakes to cool on the pan for 2 minutes. Transfer the warm cakes to the wire rack to cool completely.

Once already cool, apply a very liberal amount of the cream filling on a whoopee cake and place another whoopee cake on top of it. Repeat on all whoopee cakes and serve your homemade gluten-free whoopie pies!

Also Read   A List of Unexpected Secrets Your Tongue Can Reveal About Your Health
Sourceorganicauthority.com
Previous articleAmazing Beauty Uses of Jojoba Oil
Next articleNatural Cures for Anxiety and Insomnia