Halitosis, also known as bad breath or fetor oris, refers to an unpleasant odor on a person’s breath during exhalation. While it may be a symptom of an underlying disease condition, such a s a liver problem,

A number of causes are associated with bad breath. According to NHS UK, one cause is poor oral hygiene. As per the publication, bacteria build up on and between the teeth, as well as the tongue and gums. As a result, they produce an unpleasant-smelling gas. Along with the bad smell, bacteria also cause gum disease and tooth decay.

The choice of food and drinks also serve as potential cause for halitosis. According to NHS, foods with strong flavor, such as onions, spices, and garlic, are inclined to add smell to the breath. Aside from the aforementioned foods, beverages like alcohol and coffee also cause bad breath.

According to United States Library of medicine National Institutes of Health, halitosis stands as an unpleasant condition that leads to social restraint and severe cases suggests that it is restricted to about five percent of the populations while global research indicate high prevalence of the condition in a moderate degree. As per reports, halitosis is also seen as the third most usual reason people seek dental care, after tooth decay and gum disease. To add, nearly 20 percent of the general population reportedly suffers from the condition to some degree.

The primary symptom of halitosis or bad breath is a bad smell in the mouth, as per Healthline. According to the publication, the person may also notice a bad taste in the mouth. Usually, the taste is because of trapped; however, such kind of taste could also be due to an underlying medical condition which cannot be removed by brushing the teeth and using mouthwash.

While the dentists usually advise medical treatment for halitosis, people may also consider the following home remedies for the foul-smelling oral condition.

Proper oral care is seen as a primary way to manage halitosis. According to Therabreath, the person may brush and floss his teeth at least twice a day. Also, he should get a toothbrush with soft bristles to prevent damage to the tooth enamels and gums, in addition to usage of a fluoride toothpaste. As per the publication, brushing and flossing aids to get rid of food and plaque that are used by anaerobic and sulfur-producing bacteria as their energy sources.

Eating apples is another way to beat bad breathe. According to Everyday Health, raw crunchy foods like apples clean the teeth. These green or red fruits contain pectin, which also helps control food smell and promote the production of saliva. As per the publication, a sample recipe includes a cup of apple chunks, a cup of grated carrot, a cup of diced celery, half cup of dried cranberries, half cup of crushed walnuts, three to five tablespoons of plain non-fat yogurt, and ground cinnamon. To prepare, the ingredients are mixed in a large bowl. Then, yogurt is added to moisten the mixture. Finally, the resulting mixture is sprinkled with cinnamon.

Cinnamon also helps manage bad breathe. According to Top 10 Home Remedies, cinnamon has the essential oil called cinnamic aldehyde, which covers bad breath and reduces the amount of bacteria in the mouth. As per the publication, the person boils one teaspoon of cinnamon powder in a cup of water. Next, he adds some bay leaves and cardamom. Finally, he strains the solution and uses it as a mouth rinse to freshen his breath.

Halitosis is not as grave as other medical conditions like brain tumor and tuberculosis. However, it is vital to seek medical consult from a dentist to check oral health and identify probable consequences, such as infection and cardiovascular complications. 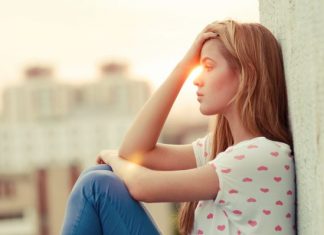 MegWright - May 12, 2016 0
Anna wakes up in the middle of the night, her heart beating hard against her ribcage. She’s short of breath and feels afraid and...

Plummer’s Nails: You Don’t Need to be a Plumber to Get...