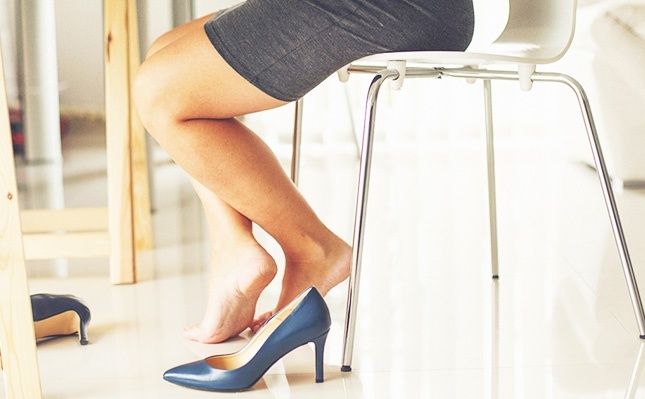 Low Calorie Snack Suggestions for a Fitter You

How to Revamp Thin, Limp and Lifeless Hair

It’s perfectly normal for your legs to feel heavy once in a while, such as after an intense workout session or standing or walking for long periods of time — just wait it off and your legs will be good as new after a while.

However, it is a completely different matter if leg heaviness seems there all the time.

This article will get you acquainted with some of the most probable reasons why those legs of yours seem heavy. Make sure that you repost this article later on so that everyone you care about may also learn that any of the following could be causing their leg heaviness:

We all know that being obese is something that can put you at risk of suffering from heart disease and diabetes. But did you know that it can also leave your legs feeling like they weigh several pounds each?

You can put the blame on excess weight that can put a lot of strain on your legs especially if you are standing or walking — supporting a lot of weight can definitely wreak havoc on the various muscles and joints situated in your legs.

Are you a woman who is in the family way? If yes and you’re in the last few months of your pregnancy, you can expect to encounter leg heaviness on a regular basis.

Other than the fact that your legs have to support not only your weight but also that of the rapidly growing baby in your womb, water retention and increased blood volume due to hormonal changes are also responsible for the issue.

Contrary to popular belief, varicose veins are more than just cosmetic issues. Severe cases of them can in fact cause problems such as swelling and discomfort, often causing the legs to feel heavy. Skin discoloration and the formation of leg ulcers are possible, too.

There are so many different reasons for the appearance of varicose veins. Oftentimes, it can be blamed on standing or walking for long periods of times. Experts confirm that it can be due to hormonal imbalance. Obesity and the aging process are also culprits.

Short for restless leg syndrome, RLS is something that involves the nervous system, and occurs when there’s an irresistible impulse to move the legs in order to attain relief from an unpleasant or uncomfortable sensation in the legs, such as a feeling of heaviness.

According to experts, RLS tends to strike late in the afternoon and most especially in the evening, and thus it can keep someone who is suffering from it from getting much-needed sleep.

Standing for chronic venous insufficiency, CVI is characterized by the presence of faulty valves or venous walls in the blood vessels situated in the legs. Such can make it difficult for blood in the legs to return to the heart.

Individuals who have to stand for extended periods of time are at high risk of developing CVI. It’s also quite common among obese individuals, pregnant women, people who are leading sedentary lives, and the elderly. Poor eating habits can be blamed for CVI at times.

It happens when fat accumulates in the walls of the arteries, which are blood vessels that take oxygenated blood to the various tissues and organs, thus making it hard for blood to pass through them. Risk factors for PAD include cigarette smoking, diabetes, and high blood pressure and cholesterol.

Needless to say, it’s a good idea for you to report your leg heaviness to your doctor especially if it’s accompanied by other unusual symptoms or already keeping you from having a smooth-sailing day.

Sourcehealthline.com
Previous articleFoods that Can Help Beautify You
Next articleSurprising Causes of Excess Skin Pigmentation

Drink These Teas for Healthier Skin