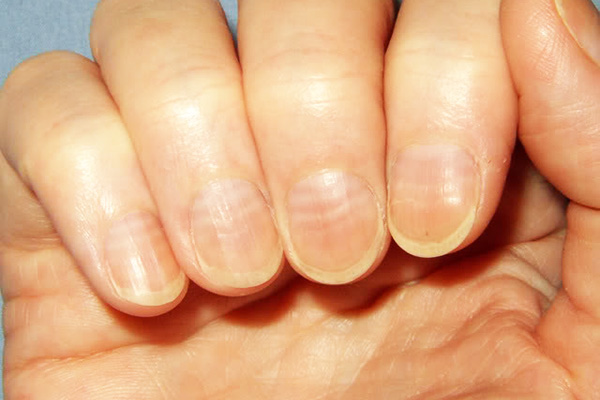 What You Should Know About Gray Hair!

Do you have light-colored bands or grooves that run across your nails? They are called beau’s lines. Sometimes they form due to trauma to the finger, in particular the kind that affects the nail matrix where new nail cells are formed. There are instances, too, wherein beau’s lines serve as indicators of an existing medical condition.

There is no need to panic if your beau’s lines are due to some form of injury. All you have to do is allow the affected nail to grow — eventually, the bands or grooves will disappear into the edge of your nail.

However, it’s a different story if your beau’s lines are due to some underlying medical condition. In some instances, it can be due to diabetes. A heart problem can also cause them to appear. Nutritional deficiency can be the reason behind them, too. Are you taking certain prescribed drugs? Then it’s possible that your beau’s lines are side effects.

Telling if beau’s lines are brought about by an injury or a medical condition is quite easy. If the bands or grooves appear only on a single nail, it’s pretty much obvious that they are induced by a trauma. But if they are present on all of your nails, then it’s safe to assume that they are due to a health concern that needs to be addressed.

If it’s apparent that your beau’s lines are not caused by trauma to your finger or nail matrix, it is a good idea to consult your doctor. He or she can do some tests to determine the root cause.

Below you will find some of the natural remedies for beau’s lines, depending on the causative factor.

Are your beau’s lines caused by accidentally banging your finger against a hard surface or dropping a heavy object on it? Then what you need to do is allow the injury to heal on its own. If there’s pain and inflammation that refuse to subside after several days, make sure that it’s seen by your doctor.

Once the injury is completely healed, have the affected nail soaked in a bowl of warm saltwater, which you can make by dissolving a teaspoon of salt in warm water. After about 10 minutes, carefully clip the edge of your nail. Soaking is a step that needs to be taken because it can be a little challenging to clip a nail with beau’s lines.

By regularly doing this, time will come when those bands or grooves are completely out of sight.

Include More Zinc in the Diet

Medical experts say that beau’s lines are sometimes due to nutritional deficiencies. If your regular diet does not consist of foods that supply the body with zinc, then you may end up with beau’s lines on all of your nails since the formation of new nail cells in the nail matrix is affected.

Zinc is actually needed for nails that are healthy and beautiful. Naturally, being deficient in the said mineral can leave your nails looking horrid, and it’s possible for them to develop beau’s lines.
Some of the foods that contain good amounts of zinc include oysters, lobsters, beef, lamb, pork and chicken. Are you a vegan? Worry not because you can obtain zinc from various plant sources. Some of them include wheat germ, nuts, seeds, beans, mushrooms, spinach and dark chocolate.

Also Read   How to Quit Biting Your Nails

You may also ask your doctor about supplementing with zinc if you think your diet is not well-balanced.

There are instances wherein a fungal infection of the nail is the reason behind the appearance of those unsightly bands or grooves. If it’s quite obvious that your beau’s lines are due to fungus, there are many home remedies that you may try that are proven effective against the said microbe.

On a regular basis, you may apply coconut oil or apple cider vinegar on the affected nail. If you have tea tree oil, which is a well-known antifungal, you may have it diluted with carrier oil before applying on the nail fungal infection.

What are Super Foods and Do They Ever Work?