Medical Conditions That Can Cause Easy Bruising 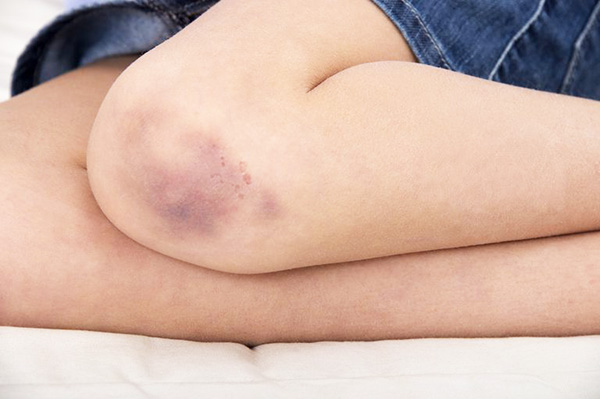 Bruises show up when trauma or impact to the skin causes tiny blood vessels called capillaries to burst and cause blood to pool or accumulate in the area. Bruises can be painful although in some instances they can cause little pain to the point that you may fail to notice that they’re around. They can vary in color, too. Aside from black and blue, they can also be purple, red, brown and green. Bruises tend to be yellowish as they heal.

Whether you are into sports or simply a clumsy individual, it’s not unlikely for you to have bruises most to the time. There are cases, however, in which easy bruising can be due to an underlying condition. That is why if you tend to have bruises constantly and you don’t know why, it’s a good idea for you to pay your doctor a visit.

The following are some medical conditions that can cause a person to bruise easily:

Platelets are blood components that are major role players in the clotting of the blood. If your platelet count is lower than normal, then it is referred to as thrombocytopenia. According to health authorities, thrombocytopenia can be due to a lot of things, and some of them include pregnancy, bacterial infections of the blood, and autoimmune diseases such as rheumatoid arthritis and lupus. Bruising due to thrombocytopenia tend to come with other signs and symptoms like blood in the stools, urine and vomit, depending on what’s causing it.

A group of cancers, leukemia is something that is characterized by an increase in the number of white blood cells in the tissues, including most especially the blood. Leukemia can be classified into many different things such as the types of cells involved and onset. Other than easy bruising, other signs and symptoms that can be associated with leukemia include unintentional weight loss, bone pain and tenderness, chronic fatigue, weakness that does not go away, swollen lymph nodes especially in the armpits and neck, red spots on the skin, and enlargement of the spleen or liver.

This is a serious condition because it involves the formation of a blood clot that can travel to the lungs and cause what’s known as pulmonary embolism. Just like what the name says, deep vein thrombosis entails blood clot formation in one of the veins found deep within the body, usually those that are situated in the legs. Individuals who sit for extended periods of time or take plenty of bed rests are prone to developing deep vein thrombosis. The same is true for those who are overweight, pregnant or just gave birth.

Having varicose veins can easily take away much of your self-confidence. Other than marring your legs with enlarged and twisted blood vessels, they can also cause you to develop bruises rather easily. That’s because the affected blood vessels are highly susceptible to ending up injured. According to doctors, people with varicose veins may develop blood clots, but those blood clots rarely travel to the lungs such as in the case of deep vein thrombosis. However, they warn that severe varicose veins may actually lead to deep vein thrombosis.

Also Read   Strengthen Your Bones With High-Impact Exercises
Sourceverywellhealth.com
Previous articleSkin Problems That Diabetes Brings
Next articleFoods to Avoid on the Anti-Inflammatory Diet

A Perfume That Smells Better When You Sweat?