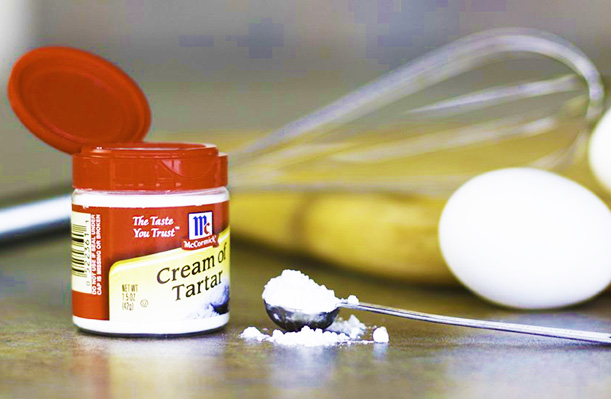 If you’re not into cooking, then you may find cream of tartar a strange ingredient. Does it come from those hard deposits on the teeth called tartar? Is it used for making foods taste tart?

Cream of tartar is actually a very common baking ingredient. Despite of its unusual name, it’s something that actually exists in nature, so there’s really no need for you to try to stay away from it.

It is a product that appears as wine is being fermented, showing up as crystals in the bottom of barrels. When used for baking, cream of tartar helps considerably increase the volume of anything that it is added to.

Aside from being a baking ingredient, are you aware that cream of tartar can also be used as a home remedy for a number of common health and beauty problems?

If you’re into all-natural remedies, then it’s a good idea for you to have a small container of cream of tartar in your pantry. You can count on it each time for dealing with the following:

In a cup of warm water, dissolve 1 and 1/2 teaspoon of cream of tartar. Squeeze the juice of half a lemon or lime into the cup, too, and consume. Take this mixture once or twice daily to put an end to your UTI.

Cream of tartar is effective against a UTI because it makes the environment in your kidneys and the rest of your urinary system hostile to bacteria, driving them out of your body each time you pee.

Want to quit smoking but you can’t because your body is craving cigarettes? Perhaps you have lots and lots of nicotine and other toxins in your system, and getting rid of them can help you quit for good.

To neutralize nicotine and other toxins, you may add a teaspoon of cream of tartar to a glass of freshly-squeezed orange juice in the morning. Drinking it is said to help make it easier to ditch cigarette smoking.

One of the most unfavorable symptoms of acid reflux is heartburn, which can make you feel that you are having a heart attack. Rather than chew or drink an antacid, simply count on cream of tartar.

All you need to do is dissolve 1/2 teaspoon of it and also 1/2 teaspoon of baking soda in a glass of water as soon as you feel the initial attack of acid reflux. Drink this to keep that heartburn from worsening.

In some cases, hypertension or high blood pressure strikes due to potassium deficiency. Since cream of tartar actually contains potassium, it may be used for keeping hypertension at bay.

However, it’s not really a good idea to try to battle hypertension on your own using some simple home remedies. Still the best thing for you to do is pay your doctor a visit.

Can’t afford an expensive anti-acne solution that your friends are using? Fret not because there is a super effective remedy for acne but isn’t as pricey as any of those, and that’s cream of tartar.

Drinking a glass of water every morning with 1 teaspoon of cream of tartar dissolved in it is said to help make acne go away. Many swear that it’s also something that helps improve scars acne tends to leave behind.

Sourcesofra.al
Previous article
How to Make Mung Bean Burger Patties
Next article
Which Beans Contain the Most Fiber?

Foods to Avoid If You Suffer From Bloating

Smart Ways to Stay Healthy for the Lazy People