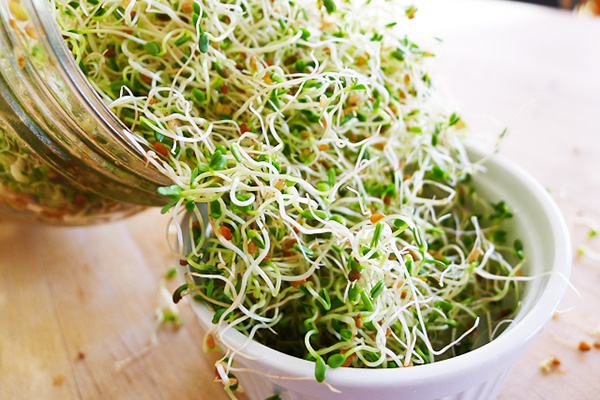 Tips on How to Alleviate Back Pain throughout Pregnancy

The alfalfa plant can be eaten as a vegetable, but it is rarely done so because of its bitter taste. Luckily, there is a simple way to include it in the diet without causing one to gag, and that is by harvesting it while immature.

Alfalfa sprouts are milder in flavor, and they can be easily added to salads, soups and even sandwiches.

Many people prefer to eat alfalfa sprouts raw because they are crunchy, and they make the texture of anything they are added to more interesting. But then you can also have alfalfa sprouts steamed, boiled or sautéed.

Despite of their funny-sounding name, alfalfa sprouts are vegetables that should be taken very seriously because they pack a lot of vitamins, minerals and antioxidants. They are high in fiber, too!

Here are some of the reasons why it’s a good idea for you to start adding alfalfa sprouts to your diet.

1. They May Reduce Cancer Risk

Scientists say that alfalfa sprouts may help keep cancer at bay. That’s because of the antioxidants in them that are capable of dealing with all sorts of cancer risk factors, from hormonal imbalance, inflammation to toxin accumulation.

2. They Help You Lose Weight

Speaking of fending off obesity, it’s a wonderful idea for you to regularly include alfalfa sprouts in your diet if it’s your goal to drop a few excess pounds. Alfalfa sprouts are very, very low in saturated fat and calories.

Consuming them can also prevent overeating because their fiber content makes them heavy on the tummy.

Due to their fiber content, alfalfa sprouts are superb at keeping constipation at bay. Consuming them on a regular basis helps ensure trouble-free bowel movements.

According to doctors, consuming alfalfa sprouts and other fiber-rich foods may also lower hemorrhoid risk.

4. They Slow Down Aging of Skin

Something as simple as adding alfalfa sprouts to your diet as often as possible is usually enough to keep your skin from aging prematurely. That’s because of the loads of antioxidants in them that fight off free radicals.

Vitamin C in them also encourages production of collagen that firms up the skin and keeps wrinkles away.

5. They Strengthen Your Immune System

Because alfalfa sprouts have vitamin C, eating them on a regular basis can help considerably lower your risk of upper respiratory tract infections such as the common cold and flu, even while they are in season.

And by the way, vitamin C in these sprouts is also essential for keeping your gums in a healthy state.

6. They May Lower Heart Disease Risk

Due to the fact that alfalfa sprouts are high in both antioxidants and fiber, adding them to your diet often may fend off heart disease, heart attack and stroke, according to doctors.

Such can be achieved because alfalfa sprouts help to lower the blood pressure as well as bad cholesterol.

7. They Help Toughen Up Your Bones

A couple of nutrients in alfalfa sprouts are essential for making the bones strong, and they are calcium and vitamin K. Iron and magnesium in these immature alfalfa plants are role players, too.

Also Read   Whole Body Workouts You Can Do with a Chair

By adding alfalfa sprouts to your diet as regularly as possible, your risk of having osteoporosis can be reduced.

Things You Never Knew About Your Nails

5 Amazing Easy Ways to Cut Down on Carbs

Get a Streamlined Neck Without Paying for a Neck Liposuction