Reasons to Throw Some Enoki Mushrooms Into Your Diet 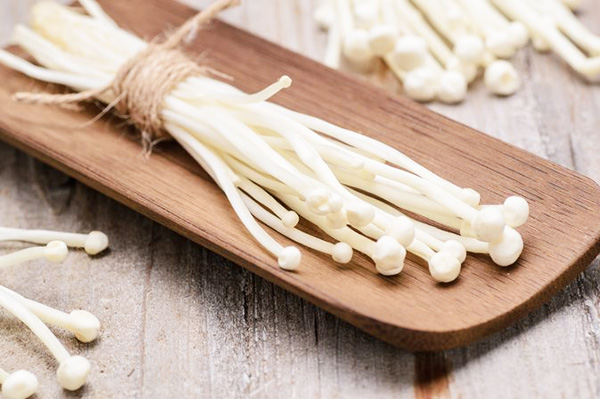 Got 40 Minutes? Then Whip Up This Curried Cauliflower Soup!

Enoki mushrooms are native to Japan, Korea and China. But if you live elsewhere on the planet, you are not going to have a hard time getting your hands on some of them as they can be easily cultivated, usually grown in bottles — you can actually purchase them still in the bottles where they’re grown!

What makes enoki mushrooms truly interesting is the way they look. Unlike most other types of mushrooms, they boast of very long and thin stems, and their caps are really tiny. It’s because of their appearance why they’re also known at times as “golden needle mushrooms”.

Wild enoki mushrooms are not as readily available as their cultivated counterparts. They usually grow at the base of Chinese hackberry, mulberry and persimmon trees. They are yellow to dark brown in color. Also, they have slightly thicker stems, the bases of which are kind of velvety. It’s for this reason why they are also called “velvet foot”. And because of where they grow, enoki mushrooms pack a mild woody flavor.

Wild or cultivated, the flavor of enoki mushrooms isn’t empowering — they can be added to just about anything without causing a change in taste. Actually, they are the ones that assimilate flavors, enhancing the taste of food!

Now that we just did a quick background checking of enoki mushrooms, it’s time for us to take a look at some of the most amazing health benefits that these unique-looking mushrooms have to offer:

Enoki mushrooms are good sources of fiber, and that’s why consuming them as regularly as possible can help get your toilet habits regular. They may also help ward off hemorrhoids and even colon cancer.

Because of the fiber content of enoki mushrooms, consuming them is good for people with diabetes or at high risk of having it. Experts say that fiber is capable of regulating the release of sugar into the bloodstream.

Other than being very low in calories and fat, the inclusion of enoki mushrooms in the diet can help you shed off excess pounds easily. They also have conjugated linolenic acid (CLA) that is known to burn fat cells.

Just like most other mushrooms out there, enoki mushrooms are good sources of protein. It’s for this reason why eating them can help you build muscles. Protein in them is also important for healthy skin, hair and nails.

They Ward Off Anemia

Enoki mushrooms supply the body with iron, a mineral so important for the production of red blood cells (RBCs) that transport oxygen. By regularly consuming them, iron-deficiency anemia can be prevented or reversed.

Also Read   Irritable Bowel Syndrome What is it?

These are just a few of the many impressive perks that enoki mushrooms are known to provide. When shopping for them, see to it that the stems and caps are firm and free of rotting or slimy parts. Unfortunately, enoki mushrooms can stay fresh in the refrigerator for about a week only, so make sure that you consume them ASAP.

Do you have health-conscious family and friends who are constantly searching for superfoods to welcome into their diet? Then have them introduced to enoki mushrooms by reposting this article on your various social media sites.

DIY Lip Balms That Are So Much Better

8 Foods You Should Be Eating to Avoid Bad Breath