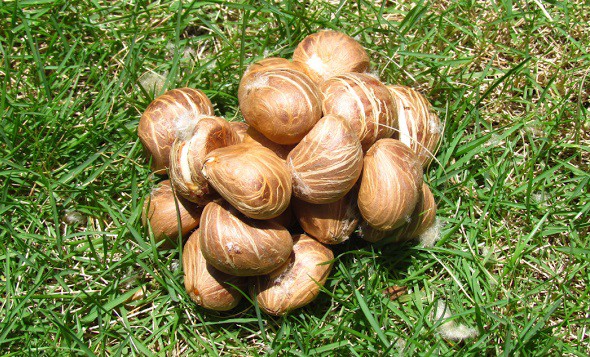 For a couple of thousands of years now, Malabar nut has been part of traditional healing in numerous Asian countries like India, China, Sri Lanka, Indonesia, Malaysia and Pakistan. The herb’s roots, bark, leaves and flowers are often used for making various preparations for healing anything from upper respiratory tract infections to bleeding.

The flowers of malbar nut has a very interesting look to it, which is said to resemble the mouths of lions — that’s why the herb is also often referred to as lion’s muzzle. Other names for malbar nut include stallion’s tooth, adulsa, vasaka, adalodakam, justicia adhatoda and bakash.

So without further ado, let us discuss the various medicinal properties of malbar nut:

Malbar nut is commonly given by traditional healers to individuals who have fever in order to have their body temperature lowered. The herb is popularly known to assist in reducing fever caused by malaria.

A special preparation out of the leaves of malbar nut is often given to adults who are having a bout of cough to help them expel mucus, thus promoting breathing and relieving chest pain. In many parts of Asia where malbar nut is native to, the herb is also usually given to kids suffering from cough.

It Relieves Asthma and Bronchitis

Because of its anti-inflammatory properties, malbar nut is beneficial for people with asthma. Extracts from the leaves can be given to asthmatics in order to manage the inflammation of the upper airways. Also, malbar nut leaf extracts are known to be very helpful for individuals with bronchitis.

Traditional healers also use malbar nut in eliminating parasitic worms in the intestines.

Malbar nut is known to be very effective hemorrhoids, most especially the bleeding kinds. That’s because the herb can help relieve inflammation as well as put an end to excessive bleeding. In fact, some health food stores are carrying malbar nut capsules that may be taken up to twice a day by those with bleeding hemorrhoids.

It Also Works Against Stomach Ulcers

Preparation made from malbar nut leaves is given to those who have stomach ulcers to help heal the ulcerations in the lining of the stomach, as well as provide relief from pain.

Tea out of malbar nut may be consumed up to a couple of times a day by someone who is prone to indigestion. It is for the fact that the said beverage can help facilitate the movement of the GI tract’s content. It’s also for this reason why malbar nut tea is also effective for dyspepsia and excess gas (flatulence).

It Flushes Out Blood Impurities

Malbar nut possesses mild diuretic properties, which means it can help increase the production of urine by the kidneys. This is why this herb is usually employed for flushing out toxins as well as other chemicals present in the blood, especially urea. In some instances, the diuretic properties of malbar nut make it effective in lowering high blood pressure.

Since it is very good at putting an end to inflammation, malbar nut is also commonly used for relieving a wide variety of inflammatory skin conditions such as eczema and psoriasis. Poultice out of malbar nut leaves are placed on affected areas of the skin to help relieve inflammation as well as a few other associated symptoms.

Malbar nut may be taken internally or used topically for dealing with swollen and painful joints. Again, it is due to the reason that the herb possesses anti-inflammatory properties.

These are some of the most noteworthy medicinal properties that malabar nut offers. Do take note, however, that its intake is not suitable for pregnant women as it can cause uterine contractions, which may lead to miscarriage or premature delivery. Also, it’s a good idea to consult a doctor before giving any malbar nut preparation to children.

5 Reasons Why You Should Eat Seaweed

Have These Teas for Immediate Migraine Relief

Easy Tips on How to Keep Your Lips Soft

7 Foods that Help Cleanse Your Liver