Why You Should You Include Bottarga in Your Diet 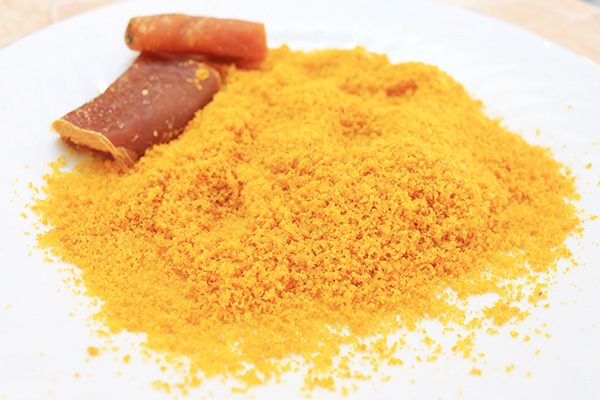 Bottarga is sometimes referred to as the poor man’s caviar because of the fact that it is very similar to caviar albeit with a slightly cheaper price tag. But still the average consumer might find its cost a little alarming. So is it a good idea to splurge on a tiny jar of bottarga? Continue reading to find out.

If you are fond of watching cooking shows, you may have already encountered bottarga a number of times, especially if the dish being prepared is Mediterranean in origin.

Simply put, bottarga is salt-cured fish roe, which is the cluster of eggs of a fish. But isn’t it the same as caviar? Yes, they are practically the same things! However, the big difference lies in where the fish roe comes from. In the case of bottarga, the fish roe comes from tuna, grey mullet and swordfish. In the case of caviar, the fish roe is harvested from wild sturgeon, although in some countries it can also be obtained from salmon, trout, carp and a few others.

It’s because of where the fish roe comes from why bottarga is touted as the poor man’s caviar — the various fish sources are cheaper. But just like what’s said earlier, the cost of bottarga is still not as budget-friendly as you would think it is, and that’s why a lot of people still consider it as a fancy and expensive delicacy.

So should you get your hands on bottarga? Well, if you happen to come across a small bottle of it whose price tag is still within your shopping budget, then it’s a wonderful idea to put one in your shopping cart!

Also Read   How to Give Yourself the Perfect Manicure

Especially if you are trying to widen your culinary skills by trying your hands at whipping up Mediterranean dishes, then having a bottle of bottarga in your refrigerator is undeniably a fantastic idea. Just like caviar, it can add sophistication and saltiness to whatever you put some of it — a little goes a long way.

These days, you can come across bottarga in different forms. It is completely up to you to choose which one suits you the most based on your personal cooking preferences.

One of the most popular forms of bottarga is the grated type. Closely resembling brown sugar, all you have to do is just sprinkle a small amount of it on your pasta, omellette or any other treat that can taste surprisingly better with a little of this Mediterranean delicacy that also serves as a very common cooking ingredient or seasoning.

Then you may also come across bottarga in a tongue-shaped brick which is covered with beeswax. To use this, you simply have to slice it thinly, and you may break up those slivers or have them grated prior to using. But then you may also sprinkle those bottarga slices with a little lemon juice and serve as appetizer.

Aside from adding saltiness to anything that you are preparing, bottarga also supplies your body with various nutrients, but in very small amounts as bottarga is often used sparingly because of its saltiness. Experts say that bottarga contains protein, calcium, zinc, and vitamins A and D.

Because bottarga comes from fish, it is also a good source of omega-3 fatty acids. According to doctors, omega-3 fatty acids have the ability to control inflammation, something that is commonly linked to the development of so many problems concerning the health, ranging from joint pain to heart disease. Numerous studies have also shown that those omega-3 fatty acids found in bottarga are also very promising cancer fighters.

Also Read   Tips on Protecting Your Hair From the Sun

It’s true that bottarga is not as pricey as caviar, but it’s not completely cheap. But worry not because you only need a little of it each time, so your investment will go a long, long way. Just stash its jar in the refrigerator for longevity.

Sourceblog.paleoonthego.com
Previous article
Get Acquainted With the Many Benefits of Sorghum
Next article
5-Minute Hairstyles for Long Hair

How to Give Yourself the Perfect Manicure