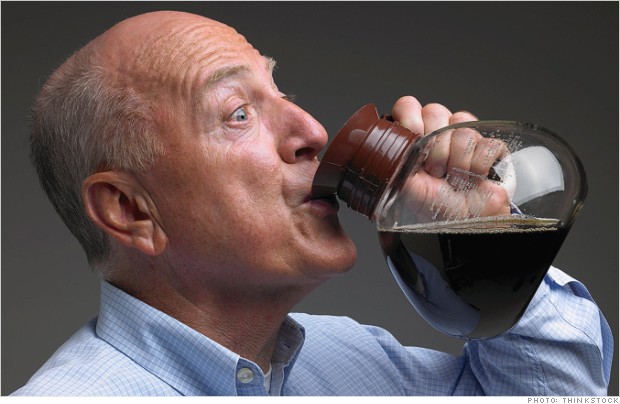 Some would even call this beverage a cup of insanity, something non-coffee drinkers can relate to because most people have a go-to drink that helps them go about the day better. For a coffee lover there is nothing like the natural hit of a warm cup.

Of course first boiled in water right after being picked from its tree was the first way it was tested and this brew was thought to have medicinal properties (and they were right!). The beans were cherry red with white blossoms that carried a similar scent to the jasmine flower.

They are prepared like cocoa beans except that the coffee beans are left to ferment in cement tanks or concrete tubs after they are taken out of their skin. Bacteria cultures take over to transform the coffee beans and let them break down naturally with their own plant mucus. The sludge is then rinsed of with water well and dried in the sun in on large and considerably flat lands where the beans are easy to organize with a rake.The dried remains that are now coffee beans are ready to be roasted and stored when perfectly dried enough.

The experts’ best guess that this coffee plant was first discovered in Ethiopia in the 1oth or 11th century. The caffeine kicker of a plant had a special destiny as it crossed the Arabian Peninsula, introducing itself to Yemen which followed the Ethiopian brew for around 300 years. A few centuries later in 1555, Istanbul had it first taste and the coffee brew was to take over Europe the following centuries spreading from areas in Italy to Paris, then London to Germany. In the middle of the 19th century, coffee has been made into a familiar drink all over the world.

So Not Bad for You

Coffee has only been given a bar rep back in the more naïve-to-nutrition vintage days where people were told egg yolks, coffee and having meat are totally bad for you and cereal, fad diets and shady “supplements” are fine. Well now the younger and youngish generations are more aware that the healthiest way to go is the most natural way- down to all the days’ meals, desserts, supplements, medicines and even bath products if you want to commit some more.

Remember! Food does not cause disease, it is bad habits repeated for years and years that break our bodies and not let us have the foods we want! For example with pork: if you have too much fatty pork and never exercise then you will get sick and think pork is bad for you. But this is not totally true, pork is fine in moderate amounts and even healthy with no fat and if you exercised you would still be eating a good amount of pork for a long time and not get sick.Makes sense?

Caffeine is not Bad

Caffeine especially just caffeine from an all-natural source without other injected energy boosting chemicals does not have proof that it is bad for you. Caffeine is never directly harmful, but in large doses at the wrong time can heighten high blood pressure and stomach acidity. At the most it can give you a bad headache but of course it can indirectly heighten symptoms in unhealthy individuals who are already very prone and vulnerable to strokes, hypertension, gastritis, migraines etc. Do not abuse coffee especially on an empty stomach.

It is also proven that coffee lowers the risk of Type 2 Diabetes, it helps the body detox and lowers blood sugar. When the amount of sugar in the blood is too high too frequently we can lose our ability to produce our own insulin and therefore suffer from diabetes. Coffee is good at helping you pace your eating of dessert and even helps your body digest and expel the harmful sugars faster. Make sure you exercise before or after to rid of that caffeine or sugar high. It is a true detoxifying ingredient in its pure, brewed, black form that it is also proven to lower bad cholesterol and raise good cholesterol levels- with enough water and a balanced diet of course.

Coffee is extremely low in fat, carbohydrates and natural sugars and protein even, next to nothing but it has other antioxidants such as Niacin a vitamin B3 member, and a good amount of minerals including Potassium, Zinc and Magnesium.It also contains a pretty good amount of Choline which is a molecule that works with some B Vitamins to assist with the health of cellular membranes. It is a safe diet drink considering you are not overly sensitive to caffeine, acidic foods on empty stomachs or both.

A Friend of Your Liver

The liver is the major detox boss of the body, vital in cleansing the blood, storing major nutrient groups and assisting in their production as well. Coffee helps the liver break down the harmful enzymes that are byproducts of digestion and absorption.

An all-natural, preferably a safe organic source that is plain brewed and black makes a truly healthy and uplifting beverage. It is the instant coffees and the mixed coffees pumped with calories that are not good for you. Coffee even has a chemical component that makes it a mild antivirus, and it is a metabolism booster for sure! A detox agent, metab booster and a very customizable healthy caffeine hit all in one! Since coffee’s energy kick is natural and not from a harmful can of commercial energy drink, coffee can actually benefit the memory instead of making you crash too hard chemical style.

Sourceimg: www.coastalhomestead.com
Previous article
Here Are Tips On How To Get Rid Of Your Stretch Marks Naturally
Next article
Take Away Sixty Percent of the Calories When Cooking Rice

Other Uses for that Bottle of Harsh Listerine

What are the Side Effects and Dangers of Whey Protein Consumption?

8 Ways to Lose Weight After the Holidays