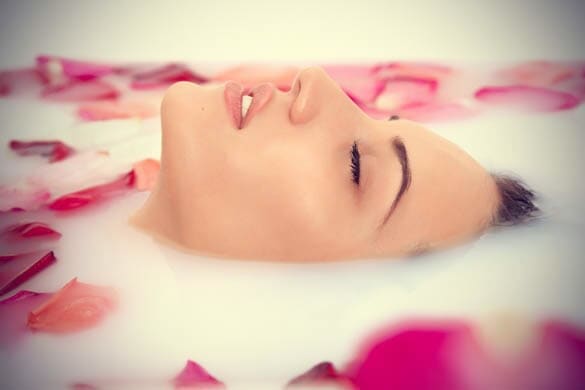 Considered to be a very romantic flower. Since the ancient times it brings romantic feelings to most people, though the thorns are a bit to lookout for. Rose has many benefits in food, medicine, different occasions and even in spas, it’s one of the famous fragrance used.

Rose have different versions of romantic stories but this one is believed to be where rose water originated. In ancient Persia where the emperor held his royal wedding, the princess ordered the imperial fountains to be filled with rose water. After their marriage, as the royal couple were walking along the fountain through the lovely gardens, they noticed tiny droplets on the surface of the fountain. The empress was curious and intrigued that she touched the tiny droplets and noticed an oily feeling and a beautiful scent emitted from them. These tiny droplets was formed under the warm streaming sun, and this is where it was discovered as rose water along with rose oil in ancient Persia.

Rose Water, a flavored water made from steeping rose petals in water. The extraction of rose oil is quite expensive because it’s too delicate.

Rose water are artificially made with the combination of different chemicals and preservatives. It is believed to be not that effective, unlike the pure one. Originally, rose water can be made at home by storing fresh petal roses in a jar, then filled it with water and placed under the sunlight for a couple of days.

These was commonly used in therapeutic preparations especially for the skin. It is believe that in ancient times Cleopatra used rose water as face mask.

It delays the aging process of the skin by reducing wrinkles and tighten skin pores. The 100% pure rose water is great as facial cleanser. It does hydrate the skin and moisturize them while cleansing it from dirt, oil and other pollutants that can harm the skin. When compared to a cleansing agent and toner, it also does not cause much irritation. So from then on Romans also used it in baths.

Due to its content like flavonoids, antioxidant, essential vitamins (A, C, D, E & B3) and tannins, it is used in making delicious drinks. Rose water syrup can be mix with a cup of cold creamy milk. It acts as a mild sedative and anti-depressant because it enhances mood, relieves tension and provides a good texture for the skin.

Due to its antiseptic and antibacterial properties, it is also used in the healing and treatment of skin infection like oily or dry scaly skin, dermatitis, inflammation and eczema. You can also apply it on sunburn or use it as a soak when taking a bath, adding only a few drops.

It also helps in treating insect bites by cooling and stopping the itchy feeling thus reducing the risk of inflammation.

Helps in soothing eye stress by gently dipping a cloth in rose water and gently apply into your eyelids to keep it cool and hydrated.

As one of the treatment use in acne, it reduces the inflammation and redness of the skin. A severe swollen pimple can be treated with just a dab of rose water to the affected area. Added to that, it prevent scars and can help to get rid of it, by adding sandalwood and lemon juice.

Best Herbs that are Perfect for the Skin

Other Uses of Common Household Items: A List of Life Hacks

Korean Remedies for Pimples and Acne