Have You Heard About the Skin Infection Called St. Anthony’s Fire? 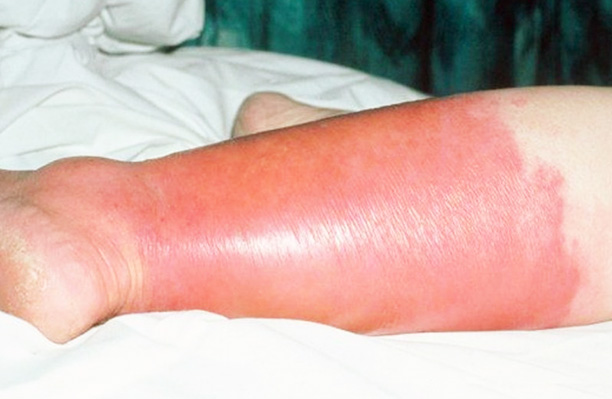 There is a skin condition that is referred to by everyone as St. Anthony’s fire. It is called as such due to the fact that it is characterized by the formation of a rash that’s bright red and shiny. Skin experts refer to is as erysipelas.

In this article, you will come across some really important pieces of information that one needs to know about St. Anthony’s fire, such as its cause, the various signs and symptoms it comes with, and how it’s treated. Don’t forget to share this article on social media to get everyone you care about also get acquainted with this skin condition.

In some instances, St. Anthony’s fire is brought about by an injury to the skin such as an abrasion or a cut. However, most cases of it are brought about by a type of bacteria called group A streptococcus. Even though it is a form of bacterial infection, it is not regarded as contagious because the microbe causing it should first infect a break in the skin.

Health authorities say that is associated with a problem concerning the lymphatic system, in particular an obstruction of it. This is what can cause a skin injury to become easily infected and turn into St. Anthony’s fire.

An individual whose immune system is weakened or compromised is regarded as at high risk of suffering from St. Anthony’s fire. The same is true for someone who is obese or has diabetes. Experts confirm that pregnancy and the intake of excessive amounts of alcohol are risk factors, too.

Also Read   Ketogenic Diet Strategies You Should Know About

Having a chronic skin condition can also put a person at risk of waking up one day with St. Anthony’s fire. Eczema, athlete’s foot and psoriasis are some examples of long-term conditions of the skin.

Just like what’s mentioned earlier, St. Anthony’s fire is named as such because the associated rash can appear fiery. It looks bright red and shiny, plus it is also slightly elevated. The borders are clearly defined, and the surface kind of resembles the peel of an orange in that it has dimples, which skin experts refer to as peau d’orange.

But before the characteristic rash appears, there are other signs and symptoms that are commonly encountered. They include fever, chills and fatigue. Loss of appetite and vomiting are others.

The said signs and symptoms show up anywhere from a few hours up to 2 days before the bright red rash appears. It doesn’t really come as a surprise why they strike because, just like what’s mentioned earlier, St. Anthony’s fire can be associated with a poorly functioning lymphatic system.

In order to deal with St. Anthony’s fire, oral antibiotics are prescribed. Some examples of those that are commonly recommended for the bacterial skin infection include penicillin, erythromycin and clindamycin.

Also Read   Can a Mask Out of Egg Yolk, Banana, Beer and Honey Promote Hair Growth? (Plus Other Home Remedies)

But in extreme cases, in particular if the problem does not resolve with the intake of oral antibiotics, intravenous (IV) antibiotic treatment at the hospital is warranted. Such is also particularly true if there’s sepsis, which is a life-threatening matter as bacteria in the blood can easily reach the various organs of the body.

Unfortunately, St. Anthony’s fire may keep on coming back. This is most especially true when the lymphatic system is no longer in an excellent condition. Commonly, daily intake of low-dose antibiotics is recommended.

Home Remedies for Eczema on the Palms

Surprising Reasons You Could Be Losing Your Hair

Getting Rid of Bad Habits that Get You Bloated